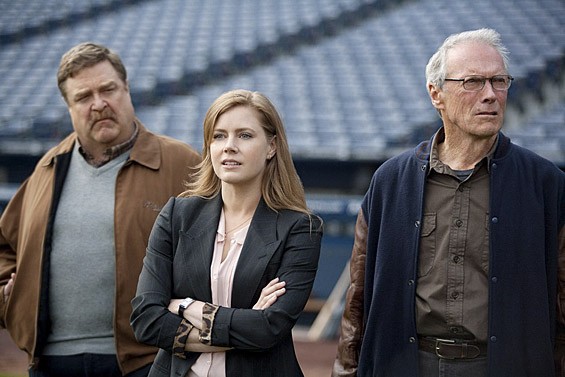 John Goodman, Amy Adams and Clint Eastwood in Trouble With the Curve.

After a nationally televised improv exercise that, for better or worse, offered more unvarnished reality than anything else at this year's political conventions, Clint Eastwood returns in his first onscreen role in four years with Trouble With the Curve. The "empty chair" jokes practically make themselves.

There is a scene in last year's Moneyball in which Brad Pitt's Billy Beane is confronted by a long conference table of dreary-looking, uncomprehending, stick-in-the-mud veteran scouts — Trouble With the Curve is those scouts' revenge, casting the Sabermetrics nerds as nemeses. Eastwood plays Gus Lobel, an Atlanta Braves scout whose historic signings include Dusty Baker and Tom Glavine. As Trouble opens, Gus has been without a discovery for some time, is increasingly hindered by a wandering blurry spot in his vision and is being challenged in his old-school conventional wisdom by a younger front-office guy, Phil Sanderson (Matthew Lillard), who gets his intelligence from a laptop and wants to see analog Gus scrapped when his contract expires.

Phil is set on using the Braves' first draft pick on a high school slugger in North Carolina, and so Gus dutifully goes to Swannanoa High School to see if the kid can play. He is joined, against his will, by his daughter, Mickey — as in Mantle — played by Amy Adams. On tense terms with her widower father since he banished her to boarding school, Mickey is today a fast-rising 33-year-old lawyer, pursuing her career with the same single-mindedness with which Gus pursued his; her reaching out to act as her ailing father's helpmate is the last, best chance for either of them to make peace.

Trouble gives Eastwood occasion to wrestle with his prostate onscreen and indulge in bantering comic grumpery along the line of: "What crawled up your ass?" "Old age." Eastwood is playing a variation on Walt Kowalski, the emotionally stopped-up curmudgeon in Gran Torino, his last onscreen gig and last wholly effective film. Gus' rasped "Give me the damn check" is interchangeable with Walt's "Get off my lawn," but Gus is a still-further withered figure; Eastwood stoops noticeably and, filmed in growling close-up, he bears a certain resemblance to Iron Maiden spokes ghoul Eddie.

What a strange thing for an actor, when one has been rehearsing one's decline and death for so very long! Eastwood is 82 today; he was wasting away from TB as early as Honkytonk Man (1982), had officially entered his "I'm getting too old for this shit" magic hour with The Rookie (1990), and memorably fumbled getting back into the saddle in Unforgiven (1992). As in that, Eastwood's Gus communes with his wife's grave in Trouble while, instead of waxing his Gran Torino or wrestling with his horse, he now bangs up his '65 Mustang while pulling it out of the garage.

For one of the most recognizable men in the world to surround himself with a cast of amateur Hmong actors, as Eastwood did in Gran Torino, along with personal touches like his whispering that film's title song over the closing credits — these are the kind of gambits that make Eastwood such an endearing figure, and if you admire his stubborn eccentricity, you must accept Eastwood the chair-talker in the bargain. It's a fair deal: We have too many clever Twitter accounts around, and not enough personalities.

The rather cautious, ploddingly professional Trouble With the Curve is not, however, an Eastwood film, but the directorial debut of Eastwood's long-time assistant director, producer and partner at Malpaso Films, Robert Lorenz. He is working from a script by rookie Randy Brown, who digested the requisite bookshelf's worth of screenwriting how-tos and has turned in a narrative that conscientiously pulls out conflicts and then dutifully tucks in those loose ends, never making a point in any way that might puzzle the slowest audience member.

There are things, all the same, to admire here. It is the first baseball movie since The Bad News Bears to deal so explicitly with the less-discussed father-daughter sports bond — I have a friend who counts her role as scorekeeper on her father's over-40 league among her most treasured memories. The gender-inversion adds something to the romantic plot as well: Appearing as Johnny Flanagan, an old signee of Gus's who has now taken to scouting, Justin Timberlake has a nice badinage with Adams — the running joke of his flip-the-script pickup is acting shy and girlish around her, as though fending off her overbearing pickup. Meanwhile, Mickey's boyfriend pitches her on an exclusive relationship: "If you look at it on paper, it makes perfect sense," says this Sabermetrician of romance, also a lawyer and as such prone to "devil's advocating this and bifurcating this," per Eastwood's recent oratory.

It goes without saying that what Gus has acquired of go-with-your-gut wisdom in baseball applies to life as well, a tautology that Trouble With the Curve takes to the point of absurdity. Swannanoa's hot prospect is one Bo Gentry, played by a beefy young actor named Joe Massingill, who is asked to play, appropriately enough, a massive douchebag. A braggart and a bully, Gentry is seen prematurely charging for autographs, licking his chops while looking ahead to "banging chicks" in the big leagues — for in Trouble's moral universe, an eighteen-year-old showing horniness is a sign of bad character. This is a canard, as is the film's supposition that there is a direct correlation between being a good man and a performing athlete, and all parties involved should know better. Here is the irony: Trouble With the Curve embodies all of the values it espouses — it is an old-fashioned, proficient, amiable and decent movie — but it has no instinct.