In the Galleries - John Zinsser CLOSES October 27 at Philip Slein 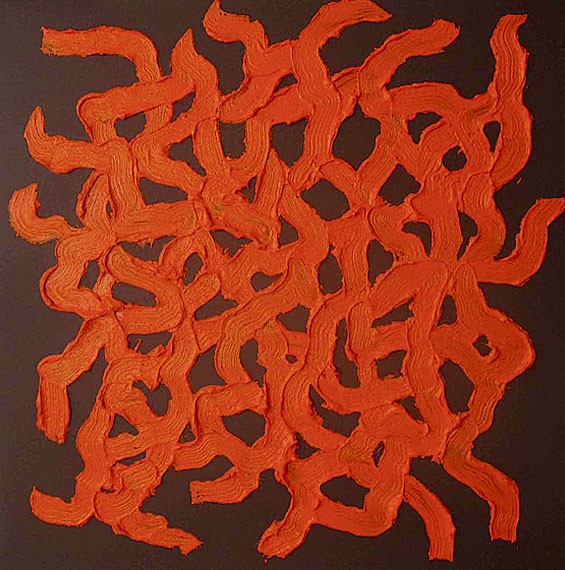 John Zinsser: Zero Guilt Tangled, undulating oil paint strokes, rendered in a single hue, lie thickly over a flat coat of enamel in a contrasting shade that ranges from mild to radical. Fire-engine red on sunset red, irradiated orange on khaki, banana yellow on dirt brown: With little variation, this is the formula New York-based artist John Zinsser obsessively revisits in his series of recent works on canvas. Viewing the work is a vigorously optical experience wherein these odd color juxtapositions make the retinas twitch. Using only tube paint, Zinsser is otherwise a bit of a classicist when it comes to abstraction, drawing the impetus for his willowy marks from Jackson Pollock and, perhaps, his color theory from Hans Hofmann. The tension of the work comes from mixing of expressive and purist impulses. Maybe the two are one and the same. Applied thickly, like cake frosting, the surface marks vacillate between the wavering variety and the straight, either forming knotted, hairlike clusters or dense grids. Whether they draw you in singly or bounce you among one another is, perhaps, part of their perceptual project. Also showing: Paul Shank: Paris/St. Louis Portrait A consummate draftsman, Shank renders portraits of St. Louis studio models and Parisian passersby with the kind of unswerving line work and expressive precision of someone long-practiced in and expert at this fundamental craft. There's something wistful about it all: Who sketches random faces in cafés anymore? Straightforward and intimate — and just shy of too much gloss — Shank's pieces pull the viewer into a way of seeing that feels refreshingly outside the usual burdens, spectacles and rush. Through October 27 at Philip Slein Gallery, 4735 McPherson Avenue; 314-361-2617 or www.philipsleingallery.com. Hours: 10 a.m.-5 p.m. Tue.-Sat. and by appointment.