Stand Up Guys is a blow to Al Pacino's legacy 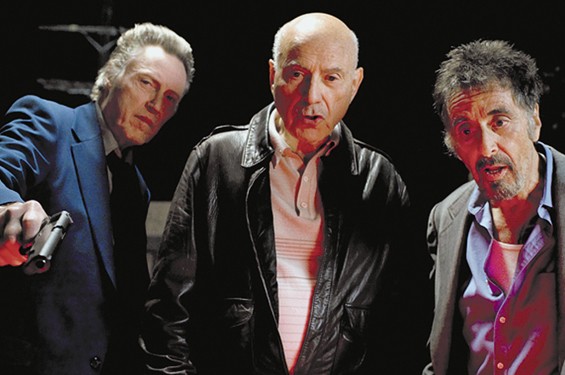 Please, for his own good, somebody clap Dustin Hoffman into a chastity belt. Based on what Al Pacino suffers in Stand Up Guys, and the identical humiliations visited upon Robert De Niro in Little Fockers, it seems that Hollywood will not be satisfied until it has speared a hypodermic into the pill-engorged erection of every last remaining leading man of the 1970s.

In Pacino's case, the setup is that he's an old-timer gangster named Val just released from almost three decades in lockup. His pal Doc (Christopher Walken) duly takes him to one of those movie brothels where all the sex workers look like Victoria's Secret models. But Pacino's Val can't perform. So the boys rob a pharmacy, Val gulps down a mouthful of Bob Dole pills, and any audience member who has seen a comedy in recent years can predict the next twenty miserable minutes. Why Val doesn't see disaster coming is a mystery. He has bragged that in prison, he could watch Starz, so he has certainly endured some Meet the Parents sequels.

It plays out like you would fear. Yes, Val, potency restored, returns to fuck his whore. Yes, the actor who played Sonny in Dog Day Afternoon winds up in a hospital bed, the sheets rigged up with some pitch-a-tent prosthetic hard-on. And, yes, a doctor must prick said hard-on with a needle, in this case not to inject medicine but actually to draw blood. And, yes, all of this is exactly as funny as it would be in real life.

Because he's a movie character, Val rallies from this ordeal and is immediately game for a full night's worth of adventures, including a couple of fights, some grand theft auto, three visits to the same diner and two more cases of breaking and entering. And there's a return visit to the brothel, where Alan Arkin — playing a near-death associate sprung from an old-folks' home — takes on two working girls at once. Without medical enhancement, he somehow leaves both bewitched and literally begging for more.

There is a plot to all this. The crime lord who rules this any-city has charged Walken's Doc with offing Pacino's Val immediately upon Val's release (murdering his dignity isn't enough). But the movie is really about the slow demolition process of old men aging in the public eye. Pacino and Walken hobble gingerly about, director Fisher Stevens affording them no vanity. Pacino's face has puddled, now all jowl and whiskers, and his voice has taken on a wet rasping undertone somewhere between a cat purring and the coring of cabbages. He yaps and yaps, but only on occasion does he gather any of the old power, most notably in a scene in which he has to beg a posse of club hotties to even consider a dance with him.

Like De Niro these days, Pacino seems to have been drained of whatever the world originally loved about him. Walken, meanwhile, has stiffened into himself, becoming more funny without losing what's imposing in him. Here, as in Seven Psychopaths, he even manages to seem a bit wise as he carries on his lifelong exploration of English-language syllables, each of which he pauses over, briefly considers and seems to find is not a clean fit for the next. Of all the '70s-made men who have been made, by age, into comic figures, only Walken seems in control of what makes him funny.

The film is appealingly grubby and scored to great soul singles from the days of its leads' primes. It's also surprisingly violent for a movie steeped in Cocoon-style "old folks like sex" jokes.

Looming over all of this is supposed to be the question of whether Doc will kill Val, especially as their night wears on and their adventures become more worth bonding over — and unbelievable. But by the end, the feeling the movie inspires isn't suspense but relief: Thank God that the producers behind Grumpy Old Men and The Sunshine Boys didn't yet have Viagra to joke about.