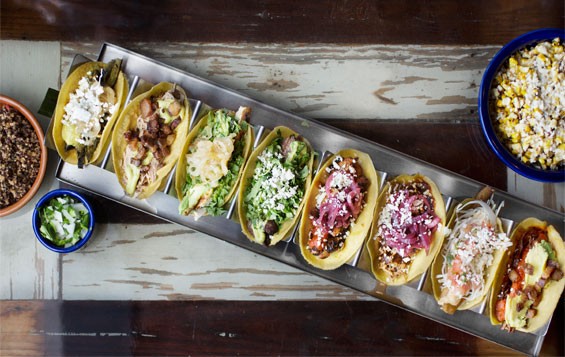 Jennifer Silverberg
Mission Taco Joint offers a range of tacos, from nopal to roasted duck to brisket. See photos: Inside Mission Taco in the Delmar Loop

Next time someone tells you St. Louis is hopelessly behind the latest national food and restaurant trends — this someone will almost certainly offer as his proof our continued fetishization of the cupcake (and he will have a point) — direct him to Mission Taco Joint in the Delmar Loop. Here he will encounter a restaurant experience very much of the moment. First of all he — and you and I — will have to wait. Mission Taco Joint does not take reservations, and diners have crammed its tables since day one. On one visit I waited several minutes for one measly seat at the bar. At lunch. While I have yet to see a line down the block, the summer throngs have yet to descend on the Loop.

All these people? Waiting for tacos? Well, yes. Tacos and also tortas and burritos and freshly fried tortilla chips with salsa or guacamole or queso spiked with chorizo, cerveza and serrano chiles. Its full name notwithstanding, Mission is no mere "taco joint." At Tortillaria in the Central West End and especially at Milagro Modern Mexican in Webster Groves, brothers Adam (the business guy) and Jason Tilford (the chef) have shown themselves more than capable of translating their respect for and knowledge of Mexican cuisine into contemporary, chef-centric restaurants. At Mission they turn their attention to Mexican street fare.

Mission opened at the very end of February in the space that had been the Delmar Restaurant & Lounge. Denizens of that dive might do a double- or even triple-take at Mission's clean interior and vivid blue and blood-orange paint scheme. The main room includes the bar and high-top tables along the windows. A smaller dining room features a map of San Francisco's Mission district painted on one wall. The speakers play Pitchfork-approved indie rock.

Mission prices its tacos à la carte at $2.50 or $3 each so that diners can mix and match two or three (or more) to make a meal. Though served taqueria-style on corn tortillas with the traditional garnishes of chopped onion and cilantro as well as lime to squeeze to taste on the side, these are more upscale (for lack of a better term) tacos than what you will find on Cherokee Street. Even familiar carne asada tacos the kitchen distinguishes by grilling the steak medium-rare and topping it with baby arugula, queso fresco and a creamy avocado-serrano sauce. Though it might seem like a joke — arugula? Really? — the combination works as a bright, peppery counterpoint to the meat.

Fans of tacos al pastor should consider the cochinita pibil taco, which features pork marinated in the traditional al pastor seasoning achiote then roasted in a banana leaf. Pickled red onion and an ancho-chile barbecue sauce provide sharp and smoky accents. The roasted-duck taco brings shredded meat topped with crisp lardons and the avocado-serrano sauce. The duck is tender but lacks the chile punch the menu promises. Tortillaria regulars will not be surprised to learn that the fish tacos (available battered and fried or wood-grilled) are the best in town.

The most intriguing taco might be the one made with nopal: strips of the roasted cactus flesh, married with poblano chile, caramelized onions, goat cheese and a roasted-jalapeño salsa. Here, though, the one flaw in Mission's tacos becomes most apparent. The tortillas, not only made in-house but in a window visible to passersby, while delicious, are not strong enough to support so much filling. I had to eat this taco (and a few others) with a fork. Doubling up the tortillas, taqueria-style, would help.

The standout meat at Mission is the brisket, available in a taco or, as I ordered it, in the "Cowboy" burrito. This burrito rivals Chipotle's in size and kicks its culo in every other respect. The meat is luscious, beefy and, thanks to an arbol-chile salsa, smoky and spicy. The other components — cilantro rice, black beans and Chihuahua cheese — are no mere fillers but distinctly flavored.

Brisket also serves as the meat in the "Hamburguesa" torta. A thin patty cooked to order — medium-rare in my case — topped with chipotle-spiced bacon, avocado, Chihuahua cheese, pickled jalapeños and garlic mayo, it makes for a pretty good burger, though the chile-dusted fries that accompany it steal the show.

Several à la carte side dishes are available, including molten, spicy refried black beans and roasted corn scraped from the cob and tossed with crema and spices.

Chips with one of the dips are the obvious draw as an appetizer. The salsas and queso are excellent; the guacamole struck me as in need of a skosh more heat and lime juice. Taquitos plump with blue-crab meat, poblano chile and roasted corn work equally well as a starter or as a meal for one.

Mission embraces the craft-cocktail trend with drinks like the "Bourbon Reforms" (bourbon, moonshine, sweet vermouth, benedictine and habanero-shrub bitters). I couldn't resist a good ol' margarita, served here on the rocks in a pint glass. Orange and lime juices and curaçao mellow the punch of blanco tequila. The draft-beer selection features craft brews both local and national as well as, of course, Modelo.

Mission serves one dessert: freshly fried churros with chocolate sauce for dipping. Mine were delicious, though on the heavy side, even by the standards of a fried dessert. Unbidden, I received a message from Adam Tilford apologizing for the heaviness — there had been a screwup with the batter in the kitchen. (I should mention that the Tilfords know me by sight.)

Mission pushes all the right trend buttons to be a smash hit, but it's this attention to detail — and the regret when their restaurants do not meet their own high standards — that have set the Tilford brothers apart at Tortillaria, Milagro and now Mission. There is a wait at Mission now because it is new and exciting. There will be a wait in the future because it is, simply, very good.