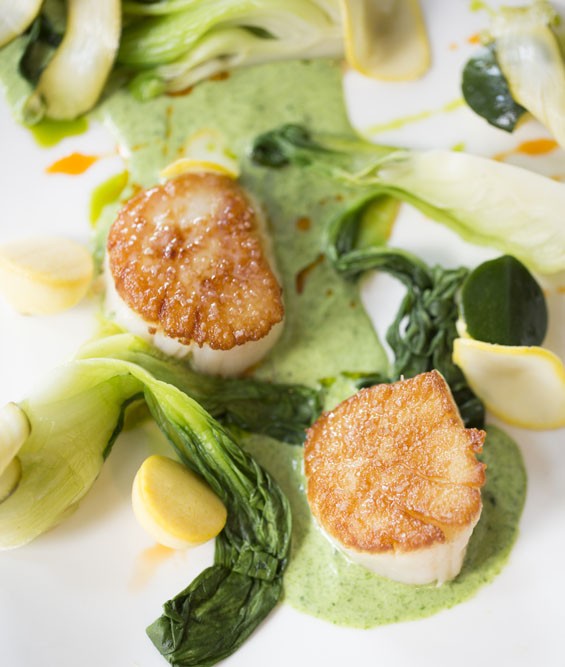 Jennifer Silverberg
Out of many, one: Scallops with summer squash, arugula and bok choy. Slideshow: Inside Central Table Food Hall.

I'll admit that I was a skeptic en route to Central Table Food Hall. True, variety is the spice of life, but I could not help but equate the food-station concept with that of an ostentatious wedding. Malls have food stations — they're called "courts." So do cruises. And if anything needs to be buried at sea, it's the threat of salmonella with your Baked Alaska, abated only by strategically positioned stations of hand sanitizer.

These thoughts quickly dissipated, though, as I entered the front doors of Central Table and was immediately greeted by a graceful host, keen on explaining the "food hall" concept before I had the chance to get confused. This was key, as one could easily be overwhelmed by not only the sheer size of the place — a behemoth at 10,000 square feet with industrial-style lofted ceilings and various nooks filled with culinary delights — but also by the bounty of options spread out like a medieval feast. Central Table is a market, coffee shop, wine bar, deli, sushi bar, raw bar, hearth and grill. From the comprehensiveness of the selections, one sees that it aims to offer a little bit of something for everyone. Yet the common thread that runs through the eatery is an emphasis on farm-to-table ingredients, as many local and regional products as possible, and housemade selections that allow the creativity of its army of chefs to run free.

Building on the dining hall concept that is catching on at places such as New York's Eataly and Los Angeles' Umamicatessen, Central Table looks to draw visitors and employees from the nearby Barnes-Jewish Hospital megacomplex as well as destination diners to the Central West End. In fact, it was the hospital that approached Central Table developer Walter McClure about bringing a restaurant to its new highrise at the corner of Euclid Avenue and Forest Park Parkway. Before the restaurant opened its doors in May the thought was that a robust lunch crowd would be the driving force of business, says Central Table's manager, Christian Bailey. But with a concept so new to St. Louis, as well as the broader country, Central Table's patrons are the ones who will ultimately define the food hall's vision, and they're going there for lunch, and dinner and drinks. (The bar, featuring craft cocktails, recently launched a happy hour.)

But let's begin with lunch. Diners can order and pay at the individual stations and either take the food to go or seat themselves at tables of their choosing. For those wanting something from different stations, the bar offers the only option for full-service dining and centralized ordering.

On a recent weekday my friend and I picked the bar option. From the hundreds of options on the menu, we chose to split our first course, an arugula salad that came drizzled with a walnut and roasted garlic vinaigrette. The dressing had a tartness and granular texture evocative of Caesar without the anchovies that played well with the bite of the arugula. The addition of edamame and asparagus added some crunch, while small cubes of the sheep-milk pecorino were nice stand-ins for the oft-used crouton as the source of salt and texture.

The chicken pita sandwich came highly recommended — twice by the host and once by the bartender — so our expectations were high. While the housemade pita was soft and kissed with the roasty char of the wood fire, the chicken breast itself was a bit underseasoned. I was hoping for some serious Mediterranean spices — oregano, garlic, citrus zest, something — but was left to my longing with a very slight dusting of what seemed like cumin. My hopes were again stoked by the sandwich's accompaniments of "spicy" tzatziki, cucumber, mint and romaine salad, but there was not enough tzatziki for me to discern spice.

For serious pizza aficionados (as readers will learn, I do not mess around in this department), the wood-fired pizza at Central Table is expletive-inducing magnificent. From the perfectly wood-fired crust to the simple tanginess of the imported San Marzano tomatoes (thank you, Central Table, for not dumping a jar full of oregano into the sauce) to the real Parmigiano-Reggiano (no powdery shaker here), mozzarella and fresh basil, it was a win across the board. If I am splitting hairs here, I will say that they appeared to use shredded, not fresh, mozzarella, and I would call this more New York style than Neapolitan, but that is like complaining about having to pay taxes on Powerball winnings.

Dinner service sees Central Table transition into more of a traditional sit-down experience with full table service. Diners can still experience the different stations, but they exist more so to showcase the preparation rather than serve as a point at which to order.

The show was certainly in full swing the night of our visit. A sea bass and cantaloupe appetizer could not have been more refreshing on a sticky St. Louis evening. The sea bass was raw and thinly sliced, and the quality of the fish shone through in the form of its delicate texture and freshness. Its pairing with the concentrated sweetness of pressed cantaloupe underscored how you can recognize freshness in certain types of seafood by a melon undertone. Tarragon sprigs added an herbal licorice component that balanced the sweet freshness of the sea with earthiness, while crispy seaweed (nori) tied the dish together with a delicate saltiness.

The beet salad consisted of fresh red and golden beets, placed on a generous spread of crème fraîche and topped with dried egg yolk. The beets, cooked to retain a semi-firm texture, were enhanced by the addition of lemon zest that brightened the dish and cut through the richness of the crème fraîche and egg yolk. I was pleasantly surprised to find that the caraway component of the dish was not in the form of its more traditional seed, but instead as slices of its anise-flavored root — a fun way to get the hint of caraway in a different form.

Switching gears completely, I was rightly tempted by the marrow plate. The primal presentation of a halved beef bone on a pillow of crusty bread was enough to satisfy anyone wanting meat in butter form. Marrow's richness can be a bit overwhelming, so the accompanying pickled shallots and peppery watercress thankfully tempered its decadence.

Noticing that there was lamb bacon to be had, we opted for the lamb and gooseberry pizza. Again, the pizza crust at Central Table is perfect, and the earthiness of the goat cheese perfectly paired with the lamb's welcome gaminess. They cure the lamb bacon in house (yes, it is really lamb belly), and I found it to be a tad salty and chewy, although there was not so much lamb on the pizza that one could be overwhelmed. The tartness of the gooseberries was necessary to such a rich and salty dish, although they featured more prominently than the lamb.

We rounded out our tour with the dish of Missouri-raised pork, cut as a rib loin with maple-glazed apricots, braised endive and polenta. The pork was butchered with a surgeon's precision and cooked to a perfect juicy pink. The polenta was rich and creamy — think more risotto than grits — and the braising of the endive softened its texture and concentrated its flavor without breaking it down completely. Unfortunately, the apricots were not as significant of a component as I had hoped, as they were fairly thin and not yet ripe and juicy. Furthermore, I got only a scant taste of maple on the peaches, leaving me to yearn for just a little more juicy sweetness. Overall, though, it was well-executed.

I could have tagged out at this point in the meal, but seeing a dessert menu with such fanciful dishes as strawberry soup and popcorn panna cotta, I had to call on my reserve stomach to save the day. The effort was not wasted. True, Central Table showcases inspired talent across its stations, but nowhere is this demonstrated more than in its pastry selections, guided by the direction of executive chef Nick Martinkovic. The whimsy and sheer beauty that Martinkovic's pastry team brings to its craft rivals the paintings on display at the Musee d'Orsay in Paris. Nothing demonstrates this impressionistic loveliness more than the chilled strawberry soup with edible orchids. The dollops of frozen lime granita provided zestiness, while the miniature pillows of meringue floated on top of the soup like toasty lilly pads. As if this wasn't enough, whispers of housemade cotton candy skirted the edges of the bowl. It was like eating a Monet.

I thought it would be hard to top the strawberry soup, but alas, I have four words for you: brown butter ice cream. The perfection of this dish should be self-evident by those words, but in case you need extra convincing, let me say this: The brown butter ice cream served with the popcorn panna cotta is one of the best things, sweet or savory, that I have had in a long time. I am surprised that I am able to even recall enough of the dish, as the first bite of the ice cream induced a trance-like state in which I believe I was muttering things like "life-changing experience." The ice cream is an accompaniment to a popcorn panna cotta in which the chef purees popcorn and infuses it into the sweetened cream to preserve the flavor while getting rid of the gritty texture. The result is a smooth panna cotta with a buttery nuttiness amped up by the caramel crunchiness of crumbled Cracker Jack — yes, the "candy-coated popcorn, peanuts and a prize" snack of childhood. In keeping with that playfulness the dish comes topped with a sprinkling of popping sugar (think Pop Rocks). And lest one think that the popping sugar was just a gimmick, I was surprised at how they ended up serving as a unique conduit of texture.

As a new culinary concept, the chefs, proprietors and staff of Central Table had the herculean feat of pulling off the opening of a new restaurant while educating patrons on how to navigate it. What could have been just a fancy food court is instead an exposition hall of culinary creativity. I look forward to seeing how the concept continues to evolve. Just please, Central Table, never take the brown butter ice cream off the menu.