They're the Haters: The outsiders of We're the Millers would detest their own square movie 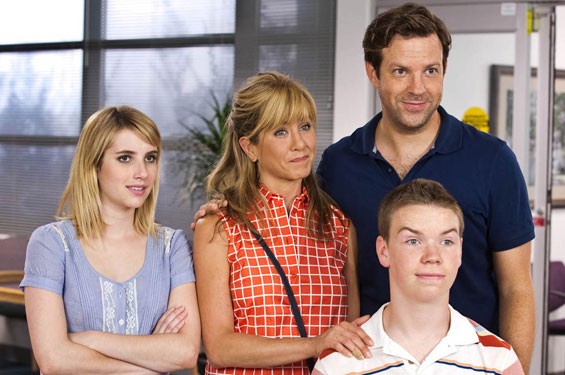 If there's one nuance mainstream comedies have yet to learn, it's that "empathetic" need not mean "likable" — audiences can feel for characters they don't necessarily want to be. The hit black comedy Horrible Bosses, which had three angry underlings plotting murderous vengeance against their you-know-whats, should have been a master class in that distinction. The film roiled with barely restrained rage, but director Seth Gordon seemed not to care whether his characters' desperate turn to killing made them despicable human beings — Gordon was content to let his viewers know he has had those feelings, too.

Horrible Bosses co-stars Jason Sudeikis and Jennifer Aniston team up again as reluctant drug mules in We're the Millers. But this film's eagerness to please functions as a slow poison, draining The Millers of its vitality by rendering its characterization uneven, its potential undeveloped, and its plot predictable and stupid. Sudeikis can't find a center amid the script's erratic tonal whims, while Aniston, so thrillingly sexy as a man-eating dentist in Bosses, disappointingly reverts back to America's Sweetheart: Stripper Edition.

Sudeikis plays David, a small-time Denver dope peddler who's not going to let marriage or parenthood harsh his life — nor will he let anyone forget it. (This is how you know he'll end up a hubby and daddy later in the film.) David's the Mr. Rogers of drug dealers — he's neighborhood-friendly enough not to sell to a kid (Will Poulter) — but also the kind of amoral schmuck who'll exploit that kid's sense of chivalry to convince him to fellate a bribe-seeking Mexican cop (Luis Guzmán). (Don't worry: the kid's of age, and the film's too tame to let the boy go through with it.)

When some street punks steal David's stash and cash, he's kidnapped and forced by his own horrible boss (Ed Helms in his sunny douchebag persona) to drive across the border and bring back "a smidge and a half" of product from Mexico. Hoping to avoid suspicion, he recruits his lap-dancing neighbor Rose (Aniston), abandoned teenager Kenny — the gentlemanly dude from the near-miss blowie — and underage runaway Casey (Emma Roberts) to pose as the Millers, his hunky-dory family. Despite being broke, David rents an RV sumptuous enough to be the first floor of Will Smith's trailer, and it's off to the cartel compound they go.

You can fill in the rest. As the road trip progresses, sitcom-style family dynamics set in. The Millers are forced into repeated contact with another RV family (Nick Offerman, Kathryn Hahn and Molly C. Quinn), exactly the kind of Velveeta-flavored squares David and Rose loathe to their bones. (Hahn makes the best of her underwritten frumpy mom; she pronounces "tampon" to rhyme with "dampen" and curses, "Oh, Klahoma!") A mix-up back in Mexico makes the Millers the target of a drug lord (Tomer Sisley), though he and his melty-eyed henchman (Matthew Willig) pursue them so leisurely they might well be taking siestas every few hours.

The film earns its R rating with quick shots of misshapen male genitalia and an extended kissing gag where Kenny makes out with both his fake sister and his fake mother, building to a true uproar. Yet it doesn't compare with the small, character-driven moment when the dorkalicious Kenny thanks an old Mexican woman with the only Spanish he knows: "Namaste." Unfortunately, such pleasures occur rarely, as the film resorts too often to the kind of lazy humor in which a string of curse words plugs in the blanks where the jokes are supposed to go.

It's become a cliché for critics to call a film's actors, themes, or topicality "wasted," but it's especially true for We're the Millers' one area of natural sympathy: the characters' downward mobility. Three of the four Millers hinge their social and moral identities on somewhat idiosyncratic distinctions: a dealer, not a smuggler; a stripper, not a prostitute; a runaway, but not homeless. They only become frantic enough to try something incredibly stupid — like risking a 25-year prison sentence for $10,000, or even just a grand — when circumstances compel them into crossing the fine lines that separate them from the qualities they define themselves against. The characters are on the margins, but the movie itself is too cowardly to explore what those margins mean, how nice people end up in them, and how life there can lead to crime.

Separately and together, David's, Rose's and Casey's economic insecurity also manifests as a kind of lame hipness, an unthinking condescension toward the people in the income bracket just above them. Those Miller members roll their eyes at the well-heeled, white-bread nuclear families around them in their yellowing RVs — the people who are physically close enough to sneer at, but too socioeconomically out-of-reach to ever join. In the face of chronic loneliness and financial precariousness, the Millers cling to their carefully cultivated coolness because antisocial snobbery is all they've got left. Instead of self-awareness and growth, though, the script gives the characters what it thinks they really need: a big house to hide from all their friendly neighbors. A family that hates together, stays together.