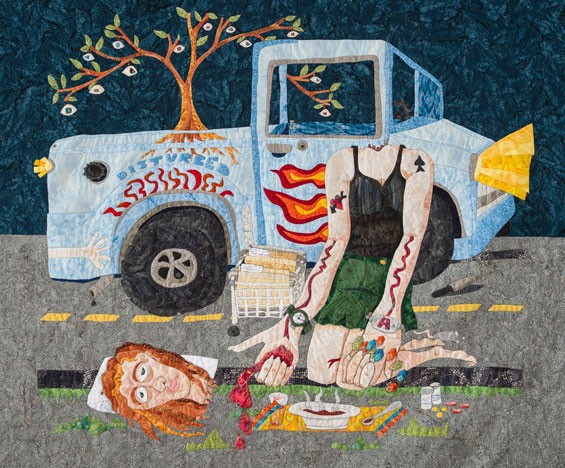 Kathy Nida’s SpreadOutOnthePavement makes a bold statement at the Quilt National 2013, opening at the Saint Louis University Museum of Art on Friday, September 20.

Childish Things
Artists create for fame, for money, for no other reason than to do something with those clever hands of theirs. But the end result is always the same: In the making, they reveal something about themselves. Mary Sprague has created a corpus of work that shows flashes of her true self, but in her new double feature, Mary Sprague: Works in Clay and A Little Wooden, she does so in an entirely new fashion. Leaving behind her usual markmaking and drawing this time, Sprague opts for sculpture in clay and wood. In A Little Wooden, the material comes from her own history; using wooden objects she has saved from her childhood and her family's past, Sprague reshapes nostalgia and history into a present-tense expression of where she is now. Looking back perhaps but still forging ahead — making, striving and spotting something new on the horizon that catches her boundless fancy. Mary Sprague: Works in Clay and A Little Wooden open together Thursday, September 12, at the Duane Reed Gallery (4729 McPherson Avenue; 314-361-4100 or www.duanereedgallery.com). Sprague's work remains up through Saturday, October 26.

Curious Gorgeous
Fashionable people of another age once paid good money for odd bits of flora and fauna, which they collected and displayed in fine cabinets in order to wow their friends. These cabinets of curiosities were the Pinterest of their day, which shows that there really is nothing new under the sun. Cary Horton and Sherri Jaudés offer a modern twist on this old custom with their exhibition Cabinet of Curiosities: Pictorial & Dimensional Oddities. Horton's photographs appear to come from another dimension, with eerie figures and animals floating in front of hazy buildings, an effect she achieves by using an inkjet printer directly on the film. Jaudés constructs realistic, albeit metallic, insects and plant specimens then displays them in bell jars and frames. Cabinet of Curiosities opens Saturday, September 14, at phd gallery (2300 Cherokee Street; 314-664-6644 or www.phdstl.com). The show remains up through Saturday, October 26.

A Stitch in Time
The craft of quilting has never enjoyed any sort of hip cachet or cool quotient, but that only goes to show you how shallow the hip and the cool can be at times. To make a quilt takes hard work, rigorous, focused attention and an innate high degree of artistry in the hand and eye of the craftsperson. Quilts, which can be traced back to ancient Egypt and China, attained prevalence in nineteenth-century America where they were made for both utility and aesthetic pleasure; the ultimate comfort textile is enjoying a resurgence today for the same reasons. Quilt National 2013 is a biennial show featuring quilt art from exhibitors representing 27 states (including Luanne Rimel from St. Louis and Pam RuBert from Springfield) and seven different countries. The exhibit is a juried one, and the selected artists expand the parameters of traditional quilt-making by incorporating the latest materials and technologies. So, this isn't necessarily your grandmother's quilt show, but she'd probably enjoy it. Quilt National 2013 debuts Friday, September 20, at the Saint Louis University Museum of Art (3633 Lindell Boulevard; 314-977-3399 or sluma.slu.edu), and it remains up through Sunday, October 27. Admission is free. The event originated in May in Ohio; St. Louis is the only location outside the Buckeye State where the full-scale exhibit can be seen.

The New Black?
Rashid Johnson confronts the idea of the "black identity" in his art. Recognizing the logical fallacy inherent in the idea that there could be a singular ID for a nation of people, Johnson tries on multiple variations of the black identity from days past. His Triple Consciousness is a stylized altar to singer Al Green in the form of his 1975 greatest-hits album, appearing in triplicate. Johnson further dips into the signals of the past with The Unwearable Dashiki, an abstract pattern created by chicken bones exposed on photosensitive paper. In photographs, paintings, installations and videos, Johnson pays homage to those black icons who represented their era — Jack Johnson and Sun Ra — while also poking fun at the futility of trying to be everything to all people. Rashid Johnson: Message to Our Folks opens Friday, September 20, at the Mildred Lane Kemper Art Museum on Washington University's campus (1 Brookings Drive; 314-935-4523 or kemperartmuseum.wustl.edu). Message to Our Folks remains on display through Monday, January 6, 2014. Admission is free.

— Paul Friswold Our Revolutionary Year
If you were around in 1968, you'll have vivid memories of what an earthshaking year that was. Everything of revolutionary and decisive magnitude seemed to erupt all at once, from the Tet Offensive in Vietnam and the Soviet army's invasion of Czechoslovakia to the assassinations of Dr. Martin Luther King Jr. and Robert Kennedy here at home. Then there were the infamous Democratic National Convention riots in Chicago and mass insurrection by students in Paris — followed by heightened unrest on U.S. campuses. If the world can seem perilously close to the brink at any given time even in normal circumstances, in 1968 it felt even crazier and more explosive. If you weren't alive during those twelve months but would like an excellent synopsis of their enduring ramifications, head to the Missouri History Museum (Lindell Boulevard and DeBaliviere Avenue; 314-746-4599 or www.mohistory.org) to take in The 1968 Exhibit. The program is a comprehensive, highly ambitious multimedia examination of what this single momentous year meant for this country and the world. It's a traveling exhibit that will be in residence at our museum from Saturday, October 5, through Sunday, January 5, 2014. Admission costs $4 to $10 per person.

— Alex Weir The Walls Are Alive
Unlike most artists, Jennifer Steinkamp applies her work directly to a museum's walls — in this case, the façade of the Contemporary Art Museum St. Louis (3750 Washington Boulevard; 314-535-4660 or www.camstl.org) for her exhibition Street Views. High-power video projectors broadcast her digital animations of flora on the bare walls, re-creating the space through these rippling waves of light. The Contemporary's clean surfaces will become a garden of otherworldly delights from Friday, October 11, through Sunday, December 29.

— Paul Friswold Quirk, Strangeness and Charm
The DIY movement has yielded a host of alternative craft shows and festivals, but there's only one Strange Folk. The early fall festival of handmade art takes place outdoors in O'Fallon Community Park (401 East Fifth Street, O'Fallon, Illinois; www.strangefolkfestival.com), and it takes advantage of the space by bringing together 150 vendors selling everything from Jillian Nickell's dreamy screenprinted posters to robots made from scavenged kitchen equipment (courtesy of Bill's Retro Robots, of course). In addition to the small village of artisans, Strange Folk brings in some of the most danceable local bands to entertain the shoppers — so danceable in fact, that this year's festival includes a dance floor for those so inclined. All this and an alpaca petting area — Strange Folk is tough to beat. The 2013 installment takes place Saturday and Sunday (September 28 and 29). Admission is free.

— Paul Friswold Check Please
The first thing you find out when learning chess is that the queen is the most important piece on the board. There is a king in the game, but he's almost entirely powerless. Her majesty the queen holds dominion over all. If you suffer the misfortune of losing your queen too early in the match, you can be almost certain you won't be the player declaring checkmate. Aside from its preeminence in the game of chess, the figure of the queen also has deep antecedents in history and the collective unconscious, as expressed in literature, art, film and fashion photography and design. The queen as a powerful archetype is everywhere; a new exhibition at the World Chess Hall of Fame (4652 Maryland Avenue; 314-367-9243 or www.worldchesshof.org), A Queen Within: Adorned Archetypes, Fashion and Chess, explores this key symbol and its pivotal role in human culture. On hand will be objects and clothing from a long list of cutting-edge international fashion designers, most notable among them Alexander McQueen, the Scots' potentate of the avant-garde fashion monarchy. This is quite a big-deal exhibit for St. Louis, to say the least. Leave the sweatpants at home and your plastic chess pieces in the glove compartment — time to properly celebrate a real cultural coup for our fine old city. A Queen Within opens Saturday, October 19, and runs through Friday, April 18, 2014, and is free and open to the public.