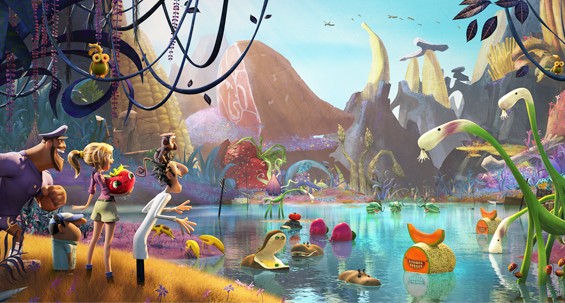 Kids are assholes, or at least cartoons think so. Animation has inked a grand tradition of cruelty, from Wile E. Coyote's countless failed firebombings to modern-day kiddie cash-grabs where the most common punchline is a fall or a fart.

Can't we all just get along? In Cody Cameron and Kris Pearn's good-hearted Cloudy with a Chance of Meatballs 2, the answer is yes—unless you're made of food. (Cannibals, stay home.) The first film, which turned a 32-page children's book into an unexpected critical darling, was a celebration of all things nerd. On an island named Chewandswallow where the only food is sardines, young inventor Flint (Bill Hader) concocted the Flint Lockwood Diatomic Super Mutating Dynamic Food Replicator, a gizmo that turns water into whatever foodstuffs he wants. Cue an unnatural disaster: The machine went berserk in the clouds and flung giant meatballs at the town, keeping Flint so frantic he couldn't seal the deal with Sam (Anna Faris), a cute, glasses-wearing weather girl. That's cool—and that love stuff was mushier than a one-ton banana.

The sequel starts seconds after the climatic food fight. Flint's a hero, but his home is a mess. Enter his hero, TV scientist Chester V (Will Forte), a Twizzler-slim, goateed guru who would have Steve Jobs clawing angrily out of his grave to complain if he hadn't already dug himself out to rage about being played by Ashton Kutcher. Chester is the inventor of his own life-changing pocket-sized rectangle: a food bar. Though busy tinkering with an update, the Food Bar 8.0, Chester promises a solution the citizens can't resist: He'll send his minions to scrape off the cheese and temporarily relocate everyone to the city of San Franjose. Better still, he'll hire Flint for an entry-level job at Live Corp, a lightbulb-shaped genius factory with a coffee station every 15 feet.

Forget the plot. It's above-average cute stuff that celebrates friendship and brains as Flint, Sam, and their crew—a moron in a chicken suit (Andy Samberg), a multitasking cameraman (Benjamin Bratt), an Old Spice–slathered cop (Terry Crews), a monkey, and Flint's monobrowed dad (James Caan)—return to the island, discover Chester's secret plans, and blah blah blah hugs hugs high fives. What matters is what they find there: puns.

Chewandswallow 2.0 is a produce-aisle Avatar ruled by wordplay. There's hippotatomuses, shrimpanzees, fruit cockatiels, and apple piethons. There's snapping tacodiles, pesky mosquitoasts, rampaging wildebeets, and hungry cheespiders with watchful sesame seed eyes. Then there's the foodimals who simply are what they are, only cuter: sour pickles, sweet berries, and screaming leeks, the latter of which sounds like the greatest '90s alt band never made. By the time a marshmallow blinks its goggle-eyes and curls up with a flock of mini-marshmallow babies, you may be convinced you've wandered into the ultimate Japanese grocery store—or perhaps snuck in a very special brownie.

Usually when the creators of a cartoon claim to have laced in grown-up jokes, it means for every four pratfalls there's an oblique reference to Paris Hilton or Jay Leno. Instead, the Cloudy with a Chance of Meatballs franchise takes its comic cues from The Muppets and Pee Wee's Playhouse, kids' shows that ripen as their audience matures. If the first film was a surprise, the second is a shock—after original directors Phil Lord and Chris Miller decamped to make the also unexpectedly terrific 21 Jump Street reboot and the upcoming Lego Movie, this follow-up could have been fast-food franchised. New co-director Pearn deadpanned that taking over the reins was "an organic choice," but Lord and Miller are aware that the sequel's quality reflects on them even without their names on the poster. Despite their commitments, they've stayed on as executive producers to remain as vigilant over the series as the Colonel is over his secret blend of 27 spices.

Will kids notice? Nah. They won't even get a joke about butter versus Parkay. But if I were the parent of an oversensitive seven-year-old, the kind who loves ponies and gets squeamish about hot dogs, I'd take them straight from the theater to a therapist's couch before they swore off eating anything but rock candy and maple syrup, the only insentient calories in this comestible Jurassic Park. When strawberries give big speeches and blueberries grow chest hair, what's mealtime and what's murder? Tellingly, even the characters in the film barely eat, and when a tribe of pickles goes nuts for sardines, the idea of flesh-eating gherkins is as subversive as Attack of the Killer Tomatoes. Hey, here's a bad idea. Let's ask Morrissey: "Heifer whines become human cries/Closer comes the screaming knife/This beautiful creature must die/This beautiful creature must die." Is it too late to have him do the soundtrack?