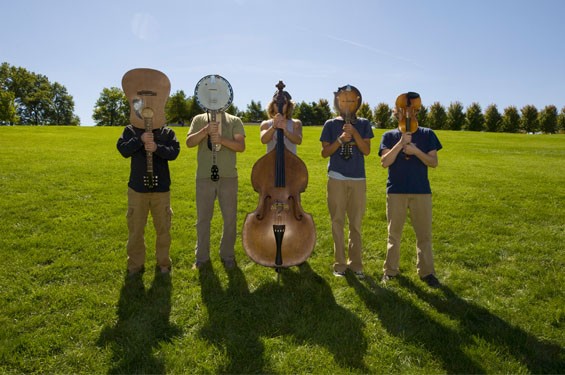 "We've got to make this wave, and the wave has to continue. It needs to be a tidal wave. It needs to have force, to go as far inland as it can," says Ryan Murphey, the banjo-player-made-general-manager of Old Salt Union. The oceanic metaphor is an understatement for a band that went from releasing basement-recorded demos to prepping for an opening spot at this year's Daytona 500 in less than two years' time.

"It's weird because I've been in bands for a long time, and this is the quickest things have ever progressed," Murphey says. "I think that's when you can tell things are going really well — you're always looking forward to the next big thing."

Old Salt Union is five Belleville, Illinois, boys made good through a bluegrass fusion that pulls influence from pop and indie rock. Banjo and mandolin have equal footing with guitar and bass, while vocal duties are shared across the board. Each player is a multi-instrumentalist; their music sounds like a group of old pals bound by decades of practice — never mind the group's median age of 28.

The band sold out the Gramophone for that album's release show. Western Skies sold well, too, and even netted two Indie Music Channel awards: "Best Folk Song" and "Best World Song." The group also has a tendency to pop in for the morning news, having performed on local newscasts for both KMOV (Channel 4) and KTVI (Channel 2).

"It's all really new to me. I've been playing guitar ever since I was little, but I taught myself. A couple years back I performed at a friend's wedding, and just the response, the feel of it — I got the bug, right out of the gate. It sunk its teeth in hard, and now this is all I want to do," Murphey remarks.

With performances at northeast Missouri's Dawg Daze of Summer, the John Hartford Memorial Festival in Bean Blossom, Indiana, and Pedaler's Jamboree in Columbia, Murphey and company have become regulars on the festival circuit. Old Salt Union even played the main stage at Wakarusa alongside Widespread Panic — a huge influence for the band's distinct breed of bluegrass.

"Whatever we think we can't do, that's what we try to do: Set unattainable goals and try to figure out how to get to them," Farrar says. The Farrar name is known for musical achievement — Jesse's uncle, Jay Farrar, founded the seminal bands Uncle Tupelo and Son Volt, leaving quite a legacy for his nephew to live up to.

The band takes a DIY approach to marketing, public relations, distribution and sales — Murphey even handled booking duties until a recent signing with Atomic Music Group, a national agency, which resulted in a 30-day tour early in 2014. Between shows, interviews, TV spots and radio appearances, the band worked to bankroll the next studio album. Ever defiant of the standard record-label relationship, Old Salt Union looked to its fans for support.

"Funds were a little tight. We'd been writing from the road and getting stuff together. So we launched a Kickstarter, and within ten days we already surpassed our goal," Farrar says. With the campaign, the band called on its fans to essentially become the record label, offering merchandise and music in return. "It's not just give and take. It's a give and give," Farrar adds.

That goal might be attainable, too. The Daytona 500 seats more than 150,000 people. If Old Salt Union's performance on February 23 attracts even a fraction of that crowd, the campaign will see a huge boost.

And how did five unassuming Belleville boys land an opening gig right before the big race? The old-fashioned way, Murphey tells us: cutting their teeth on the road at gigs both big and small. As he recalls a recent show in Atlanta, Georgia: "It wasn't a huge crowd that night. There was probably 30 people in the audience. It just takes that one person to see it and tell his friend. And he tells someone who knows somebody.

"Next thing you know, you're playing Daytona 500."