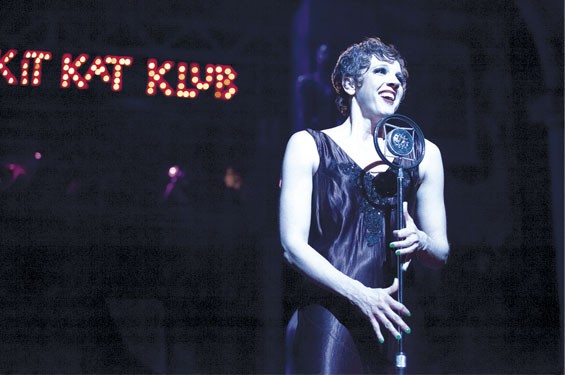 A crushing sense of regret, heartrending yet inevitable, surfaces midway through the second act of Cabaret, John Kander and Fred Ebb's prize musical about a doomed nightclub singer in the bohemia that was Berlin between the wars. It arrives just as Sally Bowles, "the toast of Mayfair," a self-styled showgirl who fled her drab flat in Chelsea to flourish among the myriad delights of Weimar Germany, realizes with devastating certainty that her world of beautiful illusion is crashing around her. Not only is she pregnant (again), but the rise of Nazism means her provisional realm of unbridled artistic expression has reached its end. Her Jewish friends are marginalized, and her lover, Cliff, the bookish bisexual who's been urging her to read a newspaper for once, has just informed her they're fleeing the fascists for America.

"Politics?" she asks. "But what has that to do with us?" Sally is committed, you see, to this libertine world of late-night carousing and bacchanalian theater. She may not be the most talented girl in town, but she has used her persuasive carnality to get hired on again at the Kit Kat Klub, the gender-bending cabaret at the center of her escapist world. She still has a few months before the baby's due, so in a final grasp at a world that is slipping through her fingers, she takes to the stage once more to deliver the show's beating heart in song.

That number, of course, is "Cabaret," her defiant paean to pleasure that in this oft-produced musical is the measure by which all Sallys are judged. For Paula Stoff Dean, who inhabits the role with a sinuous sensuality in Stray Dog Theatre's superb production, it is a moment of fatalistic embrace: Sally may no longer believe in the illusion of her bohemia, but the fantasy has defined her. She's all in, old chum, and as it fades, so must she. It is a tragic, formidable performance, as Dean stands raw and vulnerable at center stage, the song all but grinding to a halt at its emotional zenith, the lyrics heavy as a pound of flesh.

It's a showstopper, which is quite a feat given the buoyant momentum director Justin Been brings to Joe Masteroff's shimmering book. Using Robert J. Lippert's versatile set to shift feverishly between the Kit Kat Klub and Cliff's boarding house, Been has found quite a force in Lavonne Byers, who, as the Klub's androgynous Emcee, is a menacing enigma that hovers everywhere. One part Greek chorus, Byers nails some of the show's best numbers, including "Willkomen," "Two Ladies," and "If You Could See Her." (That said, one of the show's best tunes, "The Money Song," loses its way amid the placing and tossing and scrounging for all those bills.)

Dressed in leather bustiers and fishnet stockings (Alexandra Scibetta Quigley designed the show's costumes), Byers and the Kit Kat Girls and Kit Kat Boys are all vampish flair. This chorus of lithe young bodies blurs the line between real and imagined as its members gyrate through the crowd, flirtatiously serving cocktails to those who ponied up for cabaret-style seating.

It's quite a contrast to the show's other failed romance between the resigned Fräulein Schneider (Jan Niehoff) and her lonely Jewish border, Herr Schulz (Ken Haller), whose slender affair founders when the emergent-Nazi, Ernst Ludwig (a marvelously unctuous Michael Brightman), denounces Schulz as a Jew.

But the focus never shifts far from Sally, played opposite a somewhat stiff Paul Cereghino in the admittedly humdrum role of Cliff. Her sacrifice to this vanishing world is shared by the rest of the cast (many of whom sport a not-so-subtle bit of foreshadowing tattooed to their forearms), when in the final scene their stockings and bow ties are replaced by the rough cotton of the camp.

It makes for powerful theater, and as the door slams shut on their brief world, Been (perhaps overplaying his hand here) leaves the audience seated in the dark while waiting for a curtain call that, like the "the toast of Mayfair" herself, never arrives. 