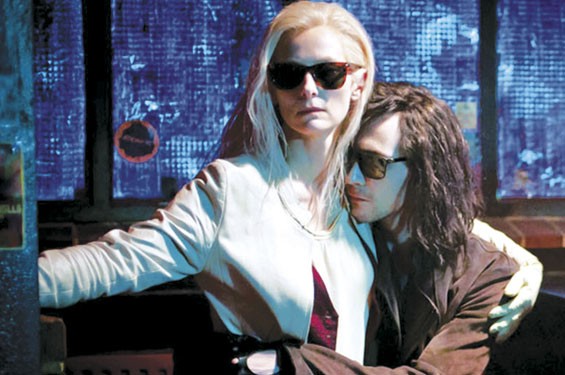 The vampires that walk among us — and they do — are not the Twilight kind, or the True Blood kind, or even the Buffy kind. In the world of Jim Jarmusch's Only Lovers Left Alive, the director's most emotionally direct film since Dead Man, and maybe his finest, period, vampires are people who prefer to own their music in some tangible form rather than entrust it to some unseen librarian in the Cloud. They care about the exact age of beautiful things — silk dressing gowns, string quartets — and about how they were made. They surround themselves with stacks of books. They like to know the Latin names of flora and fauna. They stay in love for a very long time, even through periods of long separation. And though they may be youngsters of 20, or 40, or 80 on the outside, inside they feel 300 or more, witnesses to an ever-marching parade of culture that sometimes seems to have left them behind.

If any of that sounds self-pitying, that's part of the point: The old ways have to scooch over for the new, and Jarmusch, who was making eccentric little indies before "indies" were even a thing, has enough of a sense of humor to admit that isn't always bad. When Tom Hiddleston, as an ancient vampire musician living amid piles of 45s in a decrepit Detroit Victorian, fondles an early '60s Hagstrom guitar, he flips it over to examine its pearly back: "Mother of toilet seat!" he says with nerdy admiration. It's a joke that wouldn't have gone over in the days of Vlad the Impaler.

Only Lovers Left Alive is, to put it simply, a movie about people who still care. Hiddleston's Adam might care too much. A broken-down, half-deserted city is the perfect hideout for him; with his lank black hair, Edgar Allan Poe eyes, and mother-of-toilet-seat pallor, he too seems ready to give up the ghost. By day, he sleeps. By night, he sits in his living room, alone and palely loitering, to cop a phrase from Keats. His only visitor is a dutiful rock 'n' roll fanboy named Ian (Anton Yelchin, in Eddie Vedder hair and high-tops), who procures whatever goods from the outside world Adam might need: chiefly, exotic music gear.

But not blood; Adam ventures forth to get that himself (his supplier is a crooked doctor with a Satchmo rasp in his voice, played by the always-delightful Jeffrey Wright). What he really yearns for, though, is his vampire wife, who lives in a hideaway in Tangier: Eve (Tilda Swinton) is a vision in white, with a mass of lunar hair and skin like the inside of a seashell. When she needs her blood fix, she emerges into the perfumed Moroccan night, swathed in creamy silk scarves, to see her own middleman, John Hurt's Kit Marlowe — yes, that Kit Marlowe. Vampires can stick around for yonks.

Apparently, they can keep their marriages going forever, too. That a devoted couple should live apart is either the most romantic thing you've ever heard of or the most perverse, depending on your temperament. As Jarmusch frames it, it's romantic beyond words: Eve senses, via an ingenious and charming Skype conversation, that Adam is mopier than usual, and arranges a series of night flights so she can get to him, packing only books — just the necessities, really. When she arrives, the two embrace like secret Victorian lovers; he peels off her glove and kisses her palm. Their reunion is a kind of perfection, marred only by the appearance of Eve's vampire kid sister, Ava (the wonderful Mia Wasikowska), a pint-sized troublemaker in kitty-cat sunglasses and polka-dot tights.

Only Lovers Left Alive is silly and deeply serious at once, an elegy with a light touch and more than a dash of hope. Swinton is lovely here, a moonbeam of common sense. Her Eve is the more optimistic of this romantic duo, having seen the world hit so many lows (plagues, droughts, inquisitions) that she's always ready for the uptick. She even likes skunks, exclaiming "Mephitis mephitis!" as one crosses her path. Adam, as Hiddleston plays him, is insufferable, but endearingly so. He has become distraught by the coarse heartlessness of human beings — the vampires call them zombies. He's sick, he says, of "their fear of their own imaginations."

Even if lines like that shout "Author's message!" Jarmusch is onto something. The rhythms of nearly all his films, this one included, are erratic, twitchy, each like a bug with a missing leg. But his eye for beauty, for what matters, is unerring. In the most magical sequence, Adam and Eve go for a nighttime drive, passing crumbling factories and once-majestic movie theaters that have become parking lots for both real cars and the ghosts of those Detroit used to make. As shown to us by cinematographer Yorick Le Saux (who also shot Luca Guadagnino's almost edibly lush I Am Love), these sights are sad but not wholly forlorn. There's life in them yet; they glow with an almost radioactive vibrancy.

At home, Adam and Eve spin old R&B and country records. The word "download," as uttered by the impish Ava, is a dirty one. But in his sly way, Jarmusch seems to be reminding us that in the days before vinyl records were fetish objects, they were...fetish objects. Everything and everyone old — Byron, Tesla, Keats — is always on the cusp of being new to someone. Even Detroit may someday rise from the grave, on the strength of love and elbow grease. The title of Jarmusch's movie has a double meaning: Love — of art, of plants and animals, of people — is a form of survival. It's only when you lose the hang of it that you're doomed.