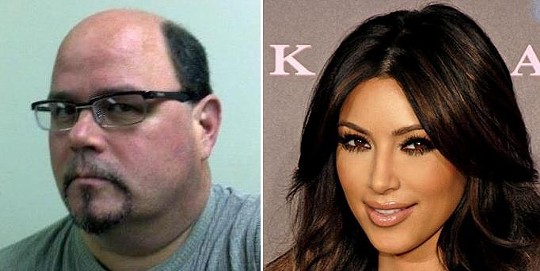 Kim Humphries (left) finds nothing amusing about Kim Humphries' (right) marriage and divorce.
For most of his five-plus decades on Earth, St. Louis artist Kim Humphries has enjoyed being the only person he knows with his name.

"In my profession, it's good to have a somewhat distinct name -- a name that's easily Goog-able," he says.

That all changed August 20 when reality star Kim Kardashian became Mrs. Kim Humphries following her marriage to basketball player Kris Humprhies. Suddenly, the name Kim Humphries was all over the Internet but not how the St. Louis artist had envisioned. The name had become tabloid fodder.

So what to do? The happy couple earlier this year.
"With somewhat ruffled feathers I set out to build my own website," says Humphries. "I needed to preserve my place in the world."

Now -- some 70 days after Kim Kardashian entered his world -- the 55-year-old artist is just about to launch his website. In a perverse way, he says he has that other Kim Humphries to thank.

"I've been meaning to build a website for a couple years now to showcase my work and comment on art," he says. "I'm not sure I'd have made myself do it without her."

Still, Humphries was (mostly) elated this week when friends began emailing and texting him the news: Kim Humphries, the celebutante, had filed for divorce. Presumably she'll change her name back to Kardashian.

"I hope she does," says Humphries. "I'd be very pleased if she'd get out of my business."

A smaller part of Humphries, though, was also a bit saddened by Kardashian's marriage, which now appears to have been little more than a publicity stunt. A few years ago Humprhies sent off for a mail-order minister's license. He has since married several of his friends.

"I take marriage very seriously," says Humphries, who offers to happily perform the wedding ceremony should Kim Kardashian walk down the aisle again.

"I'd have to have a serious talk to her about the solemn vows of marriage," says Humphries. "After that, we could negotiate a donation to the church."