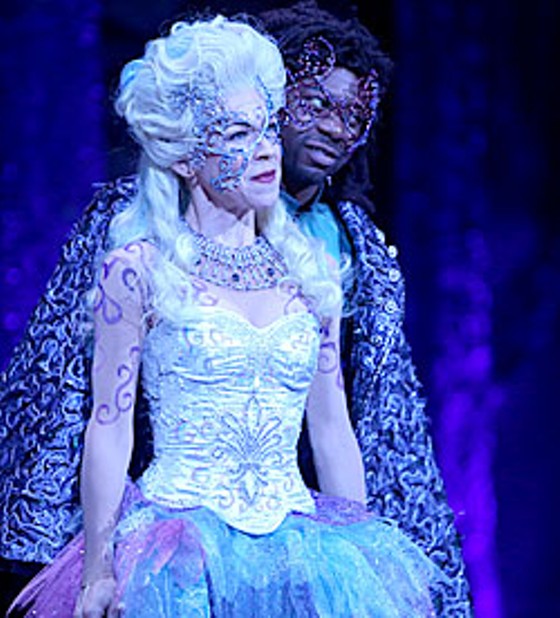 Will someone please take the glitter gun from Susan Branch Towne?

Her costumes in the Repertory Theatre of St. Louis' shimmering production of A Midsummer Night's Dream are a marvel, imbuing Shakespeare's work with a signature aesthetic that's at once elegant, whimsical and transportive — the sort of interpretive thumbprint that not only unifies the tale, but makes this otherwise superb production sublime.

As the play opens and the young Athenians Hermia and Lysander rankle her disapproving father with their intention to wed, Towne garbs the young women in elegant white gowns, which she sets off with floral accents. Meanwhile, Lysander and his rival for Hermia's heart, Demetrius, sport light summer coats, again with botanical motifs.

The visual language is unmistakable: Athenians have gained dominion over nature, training its riotous tendrils into civilized ornaments. Towne's imagery is mirrored by James Kronzer's stunning set, which in Athens comprises an orderly portico, behind which peek the wild woods.

Civilization may have carried the day, but all is not orderly in the lovers' hearts. When Hermia and Lysander elope to the woods — followed in hot pursuit by Demetrius (who is in turn trailed by the rebuked Helena) — the Athenian portico opens, and the four lovers are quickly subsumed by the enchanted realm of Oberon, King of the Fairies.

Nature is everywhere as the set's mirrored trees glow with warm blues, greens and oranges, thanks to lighting designer Lonnie Rafael Alcaraz. The fairies have fronds for hair, while shoots and tendrils snake up their arms and around their eyes. Meanwhile, the impish Puck — who turns the Athenians' world upside down, bewitching both men to swoon for the once-spurned Helena — cavorts in mossy pants. His master, Oberon, is resplendent in dreadlocks, striding about his domain in a lustrous cape and green, stalk-like bodysuit. (Still, the Fairy King's get-up — fabulous as it is — does bear more than a passing resemblance to a greenish superhero or two.)

As the Athenians venture deeper into the woods, their delicate clothing is slowly stripped away; the natural realm overtakes them like ivy over a building. So much so, in fact, that before order is finally restored (and everyone marries appropriately), the lovers become nearly as rough as the play's rustic troupe of actors, whom Towne dresses in barklike pants and woody tops, placing them somewhere between the Athenians and the Fairies.

Expertly directed by Paul Mason Barnes, the excellent cast has several standouts. Caroline Amos and Jeffrey Omura make for a witty and charming Hermia and Lysander. Gracyn Mix brings both humor and a keen understanding of meter to the role of Helena, and Jim Poulos is terrifically mischievous as Puck (though he's not nearly as agile as some of the lesser fairies, who move like they're on glass). Meanwhile, Alvin Keith and Rebecca Watson are regal in the roles of Oberon and his warring wife, Titania, while director Barnes has made several knowing and very funny decisions as these woodland royals use mystical powers to control humans and fairies alike.

Michael James Reed is hilarious as the weaver, Nick Bottom, and Adam Lendermon steals scene after scene as the hesitant tailor, Robin Starveling. (In fact, all of the laborers-come-thespians are terrific; their play within a play is simply tremendous.)

Nevertheless, the production's real stars remain Barnes, Towne, Kronzer and Alcaraz. By show's end, the Athenians may only vaguely recall their surreal midsummer night's dream, but these four artists have created a visual realm that's unforgettable.