Contemporary Art Museum: Paul Ha Is NOT Leaving for Job at MIT 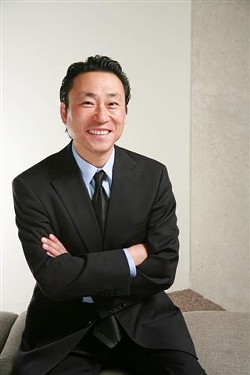 @paulha8
Photographic evidence of Paul Ha in sedentary repose, a.k.a. staying put.
Updated 4:59 p.m.: Ten minutes after we published this post, Contemporary Art Museum spokeswoman Allyson Pittman called to tell Daily RFT that despite her statement to the contrary this morning, Paul Ha is in fact leaving St. Louis for MIT.
Earlier today, when asked whether Ha had, as local art-world types were asserting, accepted a post at a museum in Cambridge, Massachusetts, Pittman replied with a cagey hedging baldfaced "It's not true."
She now assures Daily RFT that while she knew absolutely nothing about it this morning, she has since learned that her boss will be hightailing it to Boston.
Pittman adds helpfully that details about the impending move, including quotes from Ha, are available in a story published this very afternoon in the Boston Globe.

Allyson Pittman, public-relations manager for the Contemporary Art Museum St. Louis, says the scuttlebutt making the rounds in the local art community this week is false: CAM's director, Paul Ha, is not leaving for a new job at the Massachusetts Institute of Technology.

"It's not true," Pittman says. "I don't know where your sources got their information. We haven't heard anything."

So that's that.
Daily RFT didn't fall off the turnip truck just yesterday, you see. Yes, we've heard from more than one person whose cultural orbit is, shall we say, more rarefied than our own. And yes, those people have confidently informed us that Ha will soon depart St. Louis for Cambridge to take over a similar post at the List Visual Arts Center on the campus of MIT.
That doesn't mean it's true.
Ha joined CAM in August 2002, arriving from the Yale University Art Gallery, where he'd served as deputy director of programs and external affairs. During his tenure in St. Louis, Ha has overseen the completion of CAM's $6 million home in Grand Center and helped the center maintain financial stability.
In 2007 the museum's balanced books earned it a $5 million pat on the back from philanthropist Emily Rauh Pulitzer, whose Pulitzer Foundation for the Arts happens to be CAM's next-door neighbor on Washington Boulevard.

The List Visual Arts Center has been advertising a job opening for a director since April, when Jane Farver retired after twelve years at the helm. According to the List's website, the museum's mission is to "explore challenging, intellectually inquisitive, contemporary art making in all media" in the same way that "MIT pushes at the frontiers of scientific inquiry." Voicemail messages left with the center have yet to be returned.
Ha, 48, likewise has not returned calls requesting comment. Of course, CAM celebrates its season opening tonight with two new exhibits, so folks are pretty busy over there.
But we know one thing they aren't doing. They aren't composing a press release about Paul Ha and some museum in Cambridge, Massachusetts.
© 2023 Riverfront Times