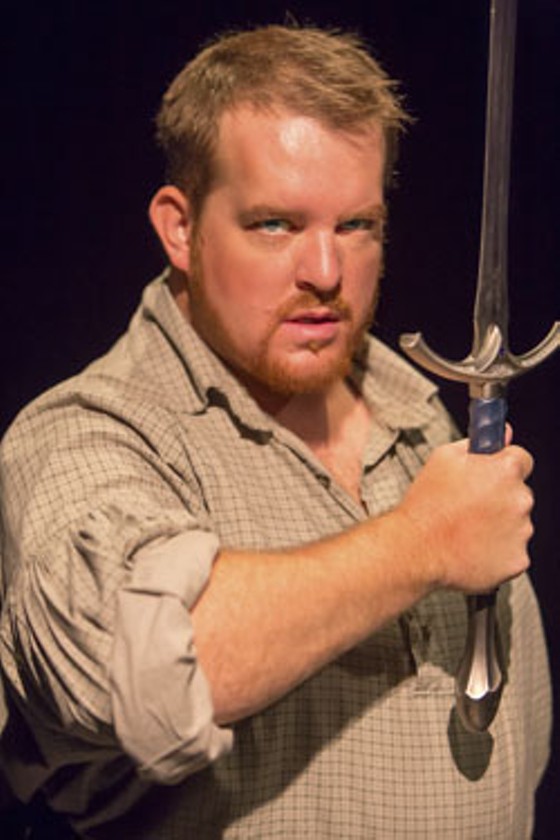 Comprising some fifteen hours of music and four distinct operas, Richard Wagner's Der Ring des Nibelungen, a vast operatic spectacle filled with gods, valkyries, giants and mortals, calls for more than 100 musicians. The composer not only devised new instruments to achieve the Ring's signature sound, he also designed an opera house expressly to perform the epic tale. The result? Gesamtkunstwerk — Wagner's notion that through its synthesis of all the arts, opera could transcend a particular cultural context, trafficking instead in the realm of universal myth.

Or at least that was the idea.

Given the Ring's immense scale, Union Avenue Opera's spirited performance of its third installment, Siegfried, seeks to retain the epic's immersive force on a smaller stage. Working with abridged adaptations by Graham Vick and Jonathan Dove, it's a project the company has been working on for three years now, presenting the Ring's first two installments, Das Rheingold and Die Walküre, the previous two seasons, before this year's Siegfried and next season's Götterdämmerung.

Inspired by German and Nordic myths, the operas tell of a magic ring that grants insuperable powers to its possessor. As the Ring's third opera, Siegfried opens with the Nibelung dwarf Mime scheming to win the ring from Fafner, a giant who guards over the treasure in the form of a dragon. Mime's weapon of choice is Siegfried, his fearless foster son, who makes short work of the giant after forging a blade of his own.

With ring in hand, Siegfried kills Mime when he discovers the dwarf had planned to murder him, then heads off to save Brünnhilde, a Valkyrie who is under a spell and trapped inside a mountain behind a wall of fire. Penetrating the mountain, Siegfried breaks Brünnhilde's spell with a kiss, finally learning to fear as they fall in love.

For all the cycle's orchestral and thematic grandiosity, Wagner made very little use of the chorus, meaning Siegfried has a relatively small cast. What's more, this efficient, lightning-quick adaptation shrinks the orchestra mightily, placing the Ring (or at least the Ring Lite) within reach of smaller companies like UAO. 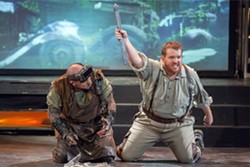 Ron Lindsey
Marc Schapman and Clay Hilley in an ambitious staging of Siegfried.

And for the most part, the current production succeeds. Under the direction of Karen Coe Miller and conductor Scott Schoonover, the Siegfried singers and orchestra perform splendidly. The largely male cast delivers a deep, earthy vocal performance, which is complemented by the orchestra's supple treatment of the pared-down score. The tenor Clay Hilley has a rich, resonant voice, and he strikes a convincing balance between bravado and naiveté as he struts about in the title role. The bass Nathan Whitson is dominating as the giant Fafner, and the baritone Jordan Shanahan has terrific phrasing as the dwarf Alberich. Similarly, tenor Marc Schapman is convincing, hunched and skittering as the treacherous Mime, and the bass-baritone David Dillard, who's a tad stiff onstage, sings well but lacks presence as the Zeuslike god, Wotan. Although she only appears in the final scene, the soprano Alexandra LoBianco is simply electrifying as Brünnhilde — her voice is cavernous as it surrounds the audience, offering rich notes that sparkle with near tactile physicality in her final duet with Hilley.

Patrick Huber's set is flexible, and Teresa Doggett's costumes are effective, although they don't track with the largely unrealized directorial decision to stage the opera in the early twentieth century.

Where the production stumbles, however, is in its heavy reliance on a projection screen. No doubt, it's difficult to bring Wagner's magnum opus to life — toggling as it does between the realms of gods and men — so maybe the screen is the best compromise. (Particularly on a limited budget: As a measure of scale, New York's Metropolitan Opera spent an estimated $40 million on its 2011 Ring production.) But while the screen is effective at conveying some of the opera's more abstract, mythic elements, it runs into trouble with concrete aspects of the set — moving mountains toward the audience during Siegfried's quest for Brünnhilde, or the crude songbird that moves jerkily back and forth. What's more, the system is buggy: On opening night, just as the dragon was swooping down on Siegfried, the young hero found himself cowering instead beneath a gargantuan Dell computer screen saver — an unintended metaphor perhaps in line with the belief that the Ring is a critique of industrial society.

Although the stage performances, rich and rewarding, are generally strong enough to overcome the production's heavy dependence on the screen, it nevertheless remains an essential production element, leaving open the question of whether Wagner's epic can truly be translated to the smaller stage.