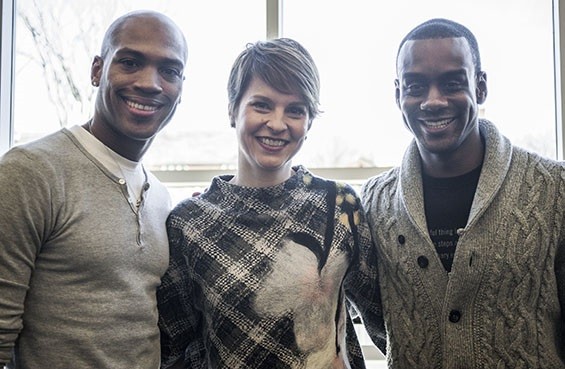 Last week's announcement that St. Louisan Antonio Douthit-Boyd would take a full-time position at Center of the Creative Arts was both a humbling and unusual homecoming for the artist. Humbling because it was at COCA that Antonio, at the age of sixteen, took his first leap toward a career that today has landed him as one of the most celebrated contemporary dancers in the word. Unusual because, in many ways, Antonio feels that he's never really left St. Louis.

"Everyone keeps saying 'Welcome home. Welcome home,' but since the moment I left COCA, I've always been here," says the dancer.

After his final bow in Paris this summer with the Alvin Ailey American Dance Theatre, Antonio Douthit-Boyd and his husband (and fellow Ailey dancer), Kirven Douthit-Boyd, will officially join COCA as co-artistic directors of dance. The two will help structure and build on COCA's current pre-professional dance program.

Growing up in St. Louis, Antonio Douthit, like many of COCA's current dance students, had the desire but not the financial means to attend an arts school. Lee Nolting, a current dance coordinator and instructor saw Antonio's talent and asked then executive director Stephanie Riven for a scholarship so the boy could stay in the program.

Since then, the organization has grown and expanded its arts programming to assist more than 4,000 students in low-income schools and at the University City-based COCA.

Current executive director Kelly Pollock would like to see Antonio and Kirven help all students, despite financial limitations, gain access to the highest-level of arts education possible. And with the duo's experience and connections, she thinks that's doable.

"Antonio has lived this and I think that he and Kirven will really embody that approach." Pollock says.

The Douthit-Boyds say they are focused on a mentoring approach that would make sure each student's schedule is catered to his or her needs as an artist.

"We really want to further develop structure in the program," says Kirven. "Though the program here is fine, it has outgrown itself. So we want to make the necessary changes to get adequate training to all of the kids, and also learn and understand their personal development so that they are ready when it comes time for them to leave here."

The duo will also focus on leading students in professional development.

"If you're going to be an artistic director, you have to lead them," Kirven adds. "You have to learn dancers' strengths and weaknesses and help them develop all of that. I feel blessed that we've been given these titles because not only will we teach, but we will be helping them in their development and making sure they see their goal."

The Douthit-Boyds have already had their hand in the technical development of many of COCA's students. They've returned for the past nine years to COCA every January to participate in one of the organization's two-week artist residencies.

Antonio attributes some of his success at COCA to his working dance instructors.

"When I was here it was great because I could see what they wanted. Instructors were able to demonstrate things for me," says Antonio. "I feel like that is why we decided to leave dance now because we can still demonstrate dance for kids -- dance is visual and they need to see it so they can mimic."

Both Antonio and Kirven are under the age of 35 and still at the height of their profession.

"It's really rare for you to see someone leave at the peak of their career because often times dancers work their entire life to get to the level of achievement of these two," says Pollock. "So I think it says a lot about their commitment to really developing this next generation here at COCA and in St. Louis."

Antonio knew he and Kirven needed to transition in their dance careers at some point, and thought of something his dance mentor has said.

"One of my favorite quotes from Mr. Alvin Ailey is that dance came from the people and it should always be delivered back to the people," says Antonio. "If I'm going to give dance back to my community, this is my community so I want to come here. I wouldn't want to be anywhere else in the world." Contact the author at [email protected].