Local practitioners of stand-up are confined like lepers to the perimeter of St. Louis - between Westport and the Landing, few venues ever host their kind.

But last evening, five of them were lured into civilization for a sort of comedy showcase at Brennan's in the Central West End. Below are some highlights.

Disclaimer #1: This art form translates poorly into print - especially if the translator is scribbling in the dark. To you comics who are checking yourselves out (and the Daily RFT knows you will): please e-mail us if your bit has suffered an injustice. Disclaimer #2: We will probably ignore you. 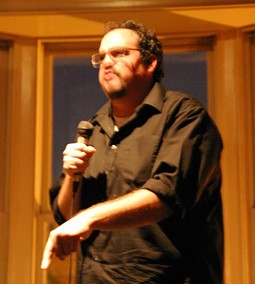 Matt Conty:
"I have a Down Syndrome uncle. My uncle Terry. Yeah. And some people might see that as unfortunate, but you know, people with Down Syndrome have a lot of skills.
Like guilting professional athletes into signing autographs. Man, that shit is awesome. I made like $10,000 on E-Bay after the All-Star Game last week."

Nikki Glaser
"It was my dad's birthday the other day, so I called him with a surprise. I was like, 'You're gonna be a grandpa!...Until Tuesday! Soak it up!' (That's also what I told the doctor). No really, I'm pro-life. I'm just pro-MY-life, and having a baby would fuck it up right now."

Jeff Wesselschmidt
"A study has shown that seventy percent of people with herpes contracted it from partners who showed no symptoms. And that's scary. Because that means 30 percent showed symptoms and did it anyway." 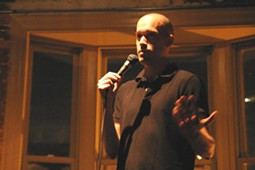 Joe Murray (on frequent misuse of the word, "random")
"A girl will be like, 'My boyfriend took me to this random restaurant last night.' No, he made reservations, it wasn't random. Or, you'll hear, 'We went to some random bar and Jill hooked up with some random dude.' And I'm like, 'No, Jill likes black guys.'"

Mark Feigenbutz
"I need a vacation. But I don't have the time. So I set up an appointment with a time-travel agent. I don't know where I'm gonna go that I've already been. But I hope I have a good time. Because I already have."

Josh Arnold
"I took a first date to see Saw V. She did NOT have a good time. It could've been my constant giggling. Or my stubborn erection. But they're NOT making a sequel to that date."
© 2023 Riverfront Times