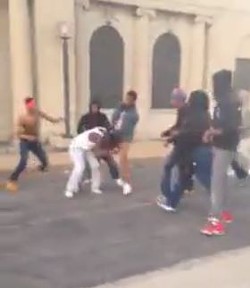 The old Delmar Boulevard transit station played backdrop to a completely insane street fight Sunday afternoon. Filmed by a bystander with a cellphone, a fight between two teenagers spilled into the street as dozens more piled on the pummeling and stomping.

The video ends with four gunshots in rapid succession.

According to a police incident report, dispatchers began receiving multiple calls for service around 4 p.m. Sunday about "large groups of juveniles" near the intersection of Delmar Boulevard and Hodiamont Avenue.

This wasn't a Gangs of New York-style street battle. Though the action is a bit blurry, the video appears to show two combatants in the tussle's nucleus, one wearing a white tank top and the other a blue shirt.

Apparently, there were a lot of people who wanted a piece of Mr. Tank Top on Sunday: The video shows him being gang-tackled in the middle of the street while his assailants viciously strike his head and face.

Three other police departments -- from Ladue, Wellston and University City -- were called in to assist the SLMPD with the incident, according to the police report. No arrests have been made, though a gun was recovered at the scene. Police say the investigation is ongoing.

Between the above times, this Department received multiple calls for service involving large groups of juveniles creating a disturbance throughout the area and a report of shots fired. The Ladue Police Department, Wellston Police Department and University City Police Department were also involved in assisting officers with the incident. As the groups of juveniles dispersed, no arrests were made and no injuries were reported. During this incident, one gun was recovered from the area. The investigation is ongoing. Follow Danny Wicentowski on Twitter at @D_Towski. E-mail the author at [email protected]