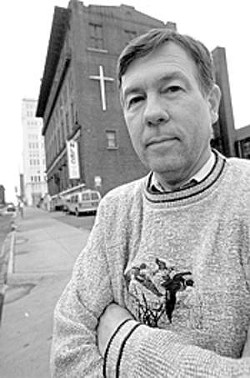 Larry Rice faces a government shut-down in Springfield.
Claiming to be fed up with handling complaints leveled at Larry Rice's Veteran's Coming Home Center, Springfield City Manager Greg Burris has formally requested on behalf of Springfield civic leaders that the U.S. Department of Health and Human Services rescind the deed to the center.

The move would shut down the day center for homeless people and return ownership of the property, a former Social Security office building, to the city.

Springfield's letter to Health and Human Services includes the accusation that Rice engages in consistent and flagrant disregard of local and state laws." Burris then lists some examples of such behavior, including:

-In January 2007, a store that was being used illegally by Rice as an overnight shelter was the site of a rape. Of the 25 people who spent the night there, five were registered sex offenders.
-A house owned by Rice's New Life Evangelistic Center was sheltering up to 20 people at a time; the house was in a residential Springfield neighborhood, and was not zoned to be a shelter.
-Burris also cited a man who attacked four people with a chainsaw at one of Rice's shelters in Callaway County, and the 2008 stabbing at St. Louis' New Life Evangelistic Center that killed 28-year-old Jeremy Dunlap.

Rice counters that events that happened outside of Springfield don't have any bearing on how the Springfield centers are operated, and further contends that the city is only going after him because they want the property.

You will notice that not one of those incidents the city listed happened at the Veterans Coming Home Center, which is the property that Springfield wants shut down; maybe Rice's second contention is valid.