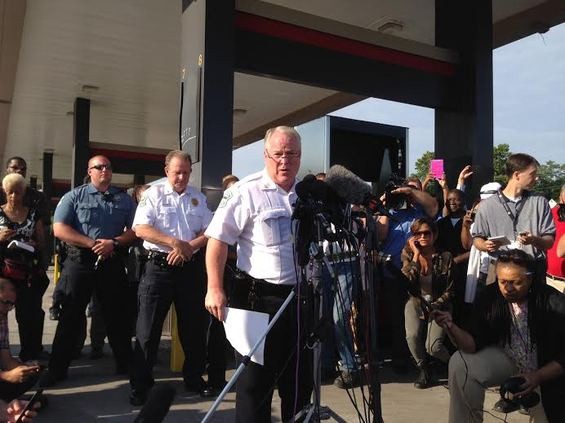 In the most significant staffing shake-up yet, Ferguson's chief executive resigned from the post he held for eight years Tuesday after the U.S. Department of Justice found evidence of unconstitutional and racially biased police and court procedures. Three other employees have also resigned, and one was fired after the scathing report.

John Shaw resigned from his post as Ferguson's city manager Tuesday night during the city's first council meeting after the justice department report was released. The council unanimously voted to accept Shaw's resignation.

"I feel it is in the community's best interest that I step aside at this time," Shaw said in a statement. "I care deeply for this community, and I believe that with our coming municipal election it is the appropriate time for the city to experience change in its city manager."

Shaw -- who oversaw all of Ferguson's departments, including the police department -- had more power over city affairs than Ferguson's mayor, who is a part-time employee. The mayor, James Knowles, and Ferguson's police chief, Tom Jackson, have so far remained in their jobs.

In the damning report, Shaw is quoted twice as supporting court procedures that the federal report says emphasize revenue over justice and contributed to "procedures that raise due process concerns and inflict unnecessary harm on members of the Ferguson community."

Here's what the report says about Shaw:

[I]n a January 2013 email from Chief Jackson to the City Manager, the Chief reported: "Municipal Court gross revenue for calendar year 2012 passed the $2,000,000 mark for the first time in history, reaching $2,066,050 (not including red light photo enforcement)." The City Manager responded: "Awesome! Thanks!" In one March 2012 email, the Captain of the Patrol Division...noted that "[t]he [court clerk] girls have been swamped all day with a line of people paying off fines today. Since 9:30 this morning there hasn't been less than 5 people waiting in line and for the last three hours 10 to 15 people at all times." The City Manager enthusiastically reported the Captain's email to the City Council and congratulated both police department and court staff on their "great work."

Shaw pushed back against the report's assertion that racial bias fueled Ferguson's policing and court methods.

"I must state clearly that my office has never instructed the police department to target African Americans, nor falsify charges to administer fines, nor heap abuses on the backs of the poor," Shaw wrote in his statement. "Any inferences of that kind from the report are simply false."

As city manager, it was Shaw's job to nominate Ferguson's municipal judge, who also resigned following the justice department report.

Ronald J. Brockmeyer, who is named in the justice department report for creating additional court fees levied against Ferguson residents, resigned from his post as Ferguson's city judge on Monday through a statement released by his law firm. The statement says Brockmeyer can't yet comment publicly but that he hopes his replacement can begin Ferguson's "healing process."

"Mr. Brockmeyer recognizes that the Department of Justice report, as well as recent media reports, regardless of their accuracy or validity, have diminished the public's confidence in the Ferguson Municipal Court," the statement reads.

Two Ferguson police commanders, Captain Rick Henke and Sergeant William Mudd, resigned Thursday after being associated with racist emails that were also revealed in the justice department report. It's unclear whether the officers sent or received the emails, which included one that said black men can't hold jobs and another saying CrimeStoppers paid for a black woman's abortion.

Court clerk Mary Ann Twitty, who was also tied to the emails, was fired Wednesday. In the statement announcing Brockmeyer's resignation, attorney Bert Fulk notes that while Brockmeyer was a part-time judge who worked in Ferguson's courts once a week, Twitty was responsible for managing the court's daily procedures.

The Missouri Supreme Court announced this week that all Ferguson court cases will go to circuit court.