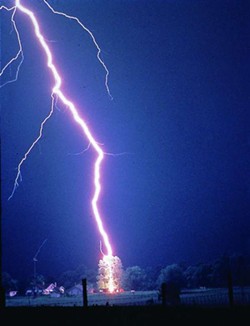 Christina Jones was walking her mail route in Ferguson yesterday when violent thunderstorms rolled through the region leaving the 34-year-old letter carrier caught in a downpour. So Jones did what most of us would do: she hightailed it under the nearest tree. The move would be a fatal mistake.

Seconds later neighbors saw Jones lying face down on the ground -- the victim of a lightning strike that left a scar several inches wide running down the trunk of the large sweetgum tree under which she had sought shelter. The force of the lightning bold literally knocked the shoes off Jones' feet.

She was rushed to Christian Northwest Hospital and pronounced dead around 2 p.m. Jones leaves behind a young son and a fiance.