Wash. U. Is the Fifth-Most Dangerous College, According to Aspirational Website 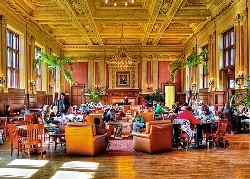 Elite Daily bills itself as "The premier online destination for aspiring men and women of Generation-Y," which explains why I'd never heard of it. (I'm far too old and not nearly as aspirational as I used to be.) These young go-getters made a list of "The Most Dangerous Colleges To Go To," and our town's Washington University showed up at number five.

The photo to the right is the image Elite Daily selected to illustrate the dangerous Washington University. It appears to be a veritable viper's nest of sin and human misery, don't it?

Wash. U.'s per capita figures (extrapolated from the school's 1 murder/22 rapes/30 assaults per 13,575 students) put them lower than both Harvard and Rutgers in terms of rape and assault, statistically speaking. And yet Wash. U. ranks higher than the number one school, University of Pennsylvania (4 murders/27 rapes/40 assaults per 24,599 students), in both of those categories.

Anyway, you don't go to Elite Daily for number-crunching. You go for the insipid motivational quotes ("Excellence is not a skill. It's an attitude." Thanks, Ralph Marston.) and the pictures of half-dressed women. Or maybe it's the Boating and Yachts category that brings 'em in. Who knows?