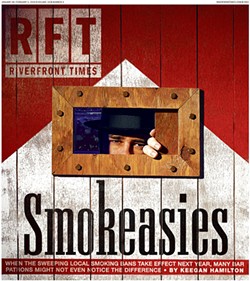 Last week, in conjunction with our feature story on smoking ban loopholes, we asked readers to name the smokiest bar in St. Louis. More than 330 people responded.

The overwhelming winner? "All the bars where you can smoke."

When it came to an actual watering hole in the city or county, the results were less definitive. At least 75 different establishments received one or more votes. Still, five places set themselves apart from the pack.

To truly crown a winner (or loser, depending on how you feel about smoky bars) we've decided to pit these final five against each other in a runoff.

Vote below and check back tomorrow to see the results.