Though it's unlikely Ichiro Suzuki combed through last week's Riverfront Times Guide to the All-Star Game, the Seattle Mariners star did visit one prominent spot on Ian Froeb's fact-packed (if controversial) "Inside Baseball: A tour of St. Louis landmarks, from the famous to the infamous (and everything in between)." 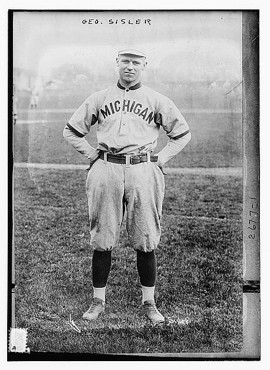 Library of Congress (via Wikimedia Commons)
Seattle Times sports columnist Larry Stone writes that while in St. Louis for the All-Star Game, Ichiro "spent part of Monday visiting the St. Louis grave of Hall of Famer George Sisler, whose single-season hits record he broke in 2004. Ichiro very much wanted to pay his respects to Sisler, and brought flowers to leave at the gravesite."

Ichiro, Stone notes, broke Sisler's single-season hits record back in 2004. Sisler family members were present at Safeco Field for the game in which Ichiro tied and then broke the record. (Sisler amassed 257 hits for the St. Louis Browns in 1920; Ichiro finished '04 with 262 hits.)