Kevin Slaten's Return: The Blowhard's Back!

The excitement of last night's Veep Parade (and the, uh, slightly impaired feeling that accompanies a morning after going balls-out in the Veep Drinking Game actually managed to banish from Unreal's internal Palm Pilot the fact that this coming Monday morning will mark the return to the airwaves of banished/disgraced/loonbag/insert your own adjective here sports-talk demi-devil Kevin Slaten.

Big ups to Dan Caesar of A Local Daily Newspaper for reminding us in this morning's Post-Dispatch dispatch that radio shouter Slaten would be returning from a six-month exile that was imposed after he allegedly put St. Louis Cardinals pitching coach Dave Duncan on the air without the latter's knowledge, in violation of Federal Communications Commission regulations.

You might or might not recall Riverfront Times' summer dalliance with Slaten, which culminated in this profile by Kristen Hinman, followed by this grateful and admiring voicemail from the man 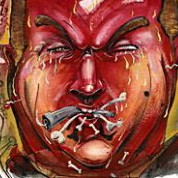 In case your memory needs refreshing, midway through what was to be a series of interviews with Slaten, the radio host got wind that Hinman was -- the nerve of some people! -- actually researching Slaten's colorful (and occasionally violent) past, whereupon his head pretty much exploded:

"Go ahead and write. But I am promising you: There'll be consequences for the newspaper. Unless you've lived a perfect life, you better watch out. I'm gonna find things on your editor. I'm going to make them as public as I can. I'll find every single thing you and your editor have done. And I'll hire a private investigator, and believe me, I've got good ones. I am going to expose everything. Everything you've ever done in your personal life."

So come Monday at noon, Slaten's back, on KSLG (1380 AM). Which brings us to today's reader poll question (after the jump):

After carpe-ing the ol' first diem, what'll His Majesty rip into first?