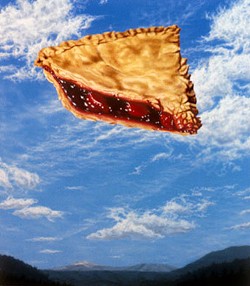 Look! Is that a Chinese cargo jet about to land in St. Louis, or just pie in the sky?
Update: Michael Webber responds to criticism of his criticism.

Air cargo consultant Michael Webber does not mince words when it comes to questioning the promises tied to the proposed Midwest China Hub at Lambert St. Louis International Airport.

Webber argues that the cargo hub won't ever result in the number of flights and jobs being touted by state and regional officials and -- in calling for $360 million in public financing -- will only further bankrupt the state.

For starters, Webber notes that the China Hub ignores the fact that the air-cargo market is dominated by just a few companies, all of which have no need to add St. Louis to their list of hub airports.

"St. Louis' big idea is a $400-million speculative venture that from inception excludes participation from global integrated carriers DHL, FedEx and UPS that account for about 90 percent of the current St. Louis market, but already have established hubs in the region," writes Webber in a June 14 article in the online trade pub Air Cargo News. "With hubs in Louisville and Memphis and regional hubs in Rockford, Illinois, and Indianapolis, Indiana, neither UPS nor FedEx (respectively) have any foreseeable need for a significantly expanded role at Lambert."

Moreover, St. Louis is too close to the biggest air-cargo hub in the Midwest: Chicago's O'Hare Airport. To think that Chinese companies would choose to ship their products to St. Louis over Chicago is ludicrous, according to Webber, who notes that once goods arrive by air from China, shipping them by ground to other U.S. cities isn't that big of deal.

With no evidence, "big idea" champions believe shippers need an alternative to O'Hare, suggesting that international air cargo shippers are disadvantaged by having to truck freight a few hours past St. Louis to Chicago, but many international shippers already truck shipments from the Midwest much further to gateways like Los Angeles and Miami," writes Webber. "Trucking company Sterling Transportation Inc. does nothing but truck freight between Miami and Los Angeles to leverage the superior Latin American access of the former and the Asian superiority of the latter. So when trucking economics sustain competitive advantages on segments as distant as Miami and Los Angeles, the distance from St. Louis to Chicago hardly seems excessive.

Webber also disputes the notion that St. Louis would need to build up to 27 million square feet of warehouse space to process and organize all the inventory arriving here from China. Based on the eight or so weekly flights St. Louis could expect to land from China, the region would need a fraction of that warehouse space -- just about 100,000 to 200,000 square feet, he says.

Finally, Webber suggests that if Missouri really wants a cargo hub with China, the Kansas City airport would make more sense. Money has already been spent there to make it an air hub for livestock (a project that's never really taken off), and KC is farther from Chicago and other Midwest cargo hubs. Concludes Webber:

"Rather than merely revise the scale of this project, Missouri should recognize that it has been hoodwinked so badly that not only should the State abandon consideration of future funding, it should seek to recover what has already been wasted. Legislators and state bureaucrats, as well as members of the media who lazily parroted talking points, should repent for having so carelessly treated a potential obligation of hundreds of millions of taxpayer dollars, even as so many much more worthy priorities confront Missouri."

Daily RFT has a call out to Webber to get more of his thoughts. Perhaps not surprisingly, the woman who answered the phone at his business this morning said he's currently on a flight and could not speak until later today. It should be noted that Webber bases his consultancy, Webber Air-Cargo Inc., out of Kansas City and his clients include Chicago and its O'Hare Airport.

Still, he's not the first air-industry insider who has looked at the plans and projections for the St. Louis China Hub and thought them to be "misleading as hell."

H/T to one of Daily RFT's favorite gadflies, Tom Sullivan, for bringing Webber's article to our attention.