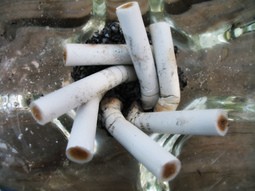 Both were there there to talk about a proposed smoking ban that could be placed on the St. Charles County this November. Can you take a wild guess as to which opposed the ban and which supported it?

The county council made no decision about the ban last night, though it seems likely that they'll present the issue to voters either in November or next April. Nearby St. Louis and St. Louis County approved smoking bans last November that don't kick in until 2011. Last month Lake Saint Louis became the first community in St. Charles County to outlaw indoor smoking at bars, restaurants and other buildings open to the public.