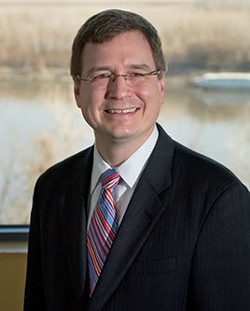 Leaving Missouri's E. coli waters, for the Gulf's oil-tarred.
A man suspended from his job for two weeks without pay last year, today has himself a new, high-profile job overseeing a $20-billion trust fund for those impacted by the Gulf of Mexico oil spill.

Mark Templeton, head of the Missouri Department of Natural Resources, is stepping down from his post tomorrow to take a job managing BP's massive victims' fund. Just last summer Templeton was suspended without pay from his job when news came out that his agency withheld reports that a popular beach at the Lake of the Ozarks had dangerously high levels of E. coli bacteria.

"I appreciate Mark's service and leadership of numerous projects critical to the protection of Missouri's natural resources -- from our state parks and historic sites, to the safety of our wastewater treatment systems," Nixon said in a statement.

It should be noted that despite the hiccup with the DNR, Templeton does have a pretty impressive resume, having worked as a environmental and sustainability consultant, served in the State Department and graduating from Yale Law.
© 2023 Riverfront Times