When police responded to calls for a shooting early this morning, they were already too late.

Jermaine Johnson, twenty, was lying unconscious at the corner of Darby Street and Natural Bridge Avenue, police say. He had suffered multiple gunshot wounds to his body -- and police pronounced him dead on the scene.

He is the 34th homicide victim this year in the city of St. Louis.

Police have very few details beyond that.

Johnson was a black male who lived on the 1900 block of North 13th Street in the Old North St. Louis neighborhood.

The report says that officers responded to calls for a shooting at around 2 a.m. this morning to the 3700 block of Darby Street in the Pine Lawn neighborhood. 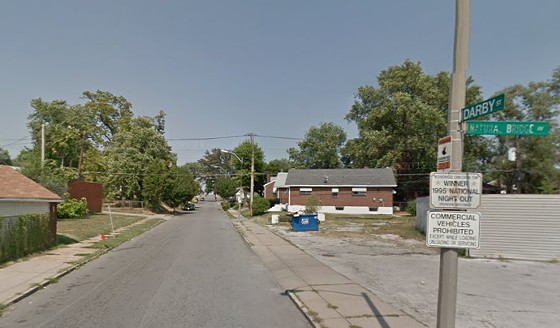 Johnson had gunshot wounds to his right shoulder and left foot and a laceration to his face, police say.

Cops spoke to witnesses who reported hearing gunshots, but police at this time don't have any more specifics to offer about the ongoing investigation. The suspect is unknown.

Incident: Homicide Location: 3700 block of Darby Date/Time: 05/21/13 @ 01:55 Victim: Jermaine Johnson, 20-year old black male of the 1900 block of N. 13th St. Suspect(s): Unknown Officers responded to a call for a shooting and upon arrival, discovered the victim lying unconscious in a street at the above location. The victim sustained a gunshot wound to his right shoulder and his left foot and a laceration to his face. He was pronounced deceased on the scene. Investigation revealed witnesses who reported hearing gunshots. The investigation is ongoing.