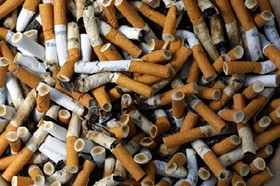 Image via
Cheap cheap! Gummed lungs!
On July 1, Missouri will have the cheapest smokes in the entire U.S. of A.

Previously, only South Carolina's excise tax was lower. But last month, lawmakers there voted to increase it to 57 cents per pack. In Missouri, the bargain basement ciggie tax is still at 17 cents. Other cash-strapped states are generating huge amounts of revenue from their tax rates. What's wrong with Missouri?

Nothing, if you ask Show-Me Institute. They seem to like this state of affairs. In a post on their blog today, they point out a discrepancy: most American adults don't smoke, but generally tend to favor high tobacco taxes. The problem there: "those least directly affected by the tax feel justified in imposing a tax on those most affected."

Maybe, though we sure do have an awful lot of smokers around these parts. According to a quick Daily RFT number crunch of federal data, Missouri has the sixth largest population of smokers among the 50 states. Cough WHEEZE!