The Five Biggest B.S. List Makers on the Internet 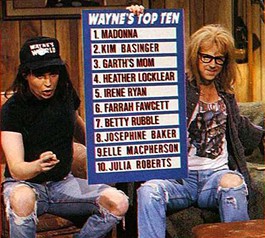 Image source
Now THAT is a well-reasoned and objective top ten list.
This week's RFT feature story takes a satirical look at the arbitrary and often asinine world of online rankings, studies and surveys.

We're talking about the lists that attempt to quantify the unquantifiable and compare the unique trials and tribulations of one town to another with topics like "America's 20 Most Miserable Cities," or "The Best -- and Worst -- Cities for Moms."

They're undeniably fun to read but often skimpy on the facts and substance necessary for legitimate news and analysis. In other words, they're perfect for the Internet! As anyone with a blog and access to Google Analytics will tell you, nothing keeps those mouses clicking like a well-conceived list. I mean, why else would you be reading this right now?

Here are the top five offenders and a few examples of their work.

5. Travel + Leisure magazine
In addition to directing you to the latest organic, green-friendly hotel in San Francisco or retro pub in London, the magazine's writers have penned multiple lists that come up short when it comes to objective, data-based comparisons.

Exhibit A is their annual "America's Favorite Cities" ranking which includes a 1-30 list of metropolises that supposedly have the "Most and Least Attractive People." If beauty is in the eye of the beholder, then this one is truly ugly. Everyone knows that New York and LA are home to more models than other American cities but what about their average residents (you know, 99 percent of the population) as compared to other cities?

Bonus negative points for making their lists into hard-to-navigate slideshows.

4. The Huffington Post
HuffPo may be the king queen of straight-faced news aggregators (when it comes to snark, nobody tops Fark) but the site also lays claim to the throne of most frivolous list-maker when they bang out columns with caps-locked titles like "The BEST And WORST Cities For The Newly Graduated."

Read the explanation they gave for making St. Louis a "WORST":

The 'Gateway to the West' has been bleeding residents since 1950. The city added 5,000 jobs last month -- due in large part to construction season and a new casino opening -- but unemployment still hovers at 9.5 percent.

In other words: "We've always heard St. Louis is kind of awful so even though they're adding jobs and have about the same unemployment rate as the rest of the nation, let's make them a WORST."

3. The Daily Beast
Writer Clark Merrefield does his part to feed the Beast by churning out several lists each month. Sometimes he uses solid data to make thought-provoking critiques of people, places and institutions, usually based on topics that are in the news. The "America's Most Dangerous Colleges" ranking composed in the wake of the Yale murder last September stands out in particular.

On the other hand, there are also a myriad of completely baseless lists (always "backed up" by some combination of statistics) like "America's Craziest Cities" or "America's Smartest Cities."

Explains Merrefield: "They're usually a fun topic. They're easy to understand, and people have always liked trends and seeing where things in their lives fit in...I hope the reader sees it for what it is. With these things, about 30 percent are meant to be a fun thing to read, and the rest are based on real data."

2. Forbes
The business news stalwarts have an entire section of their website devoted to lists. When they stick to their areas of expertise, i.e. "The World's Billionaires," they often do great work -- even including Mexican cartel kingpin Joaquin Guzman Loera aka El Chapo as one of the world's richest men.

But when they get off the beaten path, the wheels tend to fall off.

For instance, it seems St. Louis was named the seventh-most "miserable" city simply because the Rams have been one of the worst teams in the NFL over the last few seasons.

Image via Joe Sports Fan
"A week later they had us ranked as one of best places to buy a house," says Kara Bowlin, press secretary for St. Louis mayor Francis Slay. "If you wait long enough, these things will kind of debunk themselves."

1. Men's Health MetroGrades
When they tire of thinking up another 127 ways to give you washboard abs, the publication churns out surveys by the bushel for a section of its website called MetroGrades.

The highlight (or lowlight) has to be their annual "Best and Worst Cities for Men" study, in which St. Louis took home the top prize in 2007. What exactly makes a city good or bad for men you might ask? Not how many single women live there, nor how good the barbecue is nor how cheap the beer prices are. Nope, it's the health and fitness of the average male and the ever-reliable crime statistics compiled by the FBI and used by CQ Press and MorganQuitno to tabulate the always-controversial "Most Dangerous Cities in America" ranking.

As part of "America's Top Sports Town" they named St. Louis the 98th best baseball city and gave the top spot to...drumroll...Fremont, California because they have ""the [highest] percentage of adults attending baseball events." Translation: the Little League fields in Fremont are the place to be on a Friday night.