If you were in the St. Louis metro area over the Labor Day holiday, you didn't have much of an excuse not to go out at least once over the three-day weekend. There was a lot happening, and here's what you may have missed.

Slide Show Republican presidential nominee John McCain and his newly picked VP candidate, Sarah Palin, appeared with a cluster of other big-name GOP members on Sunday in O'Fallon. It was the last big event before the convention in Minneapolis, which began Monday. We have photos of the McCain-Palin rally. 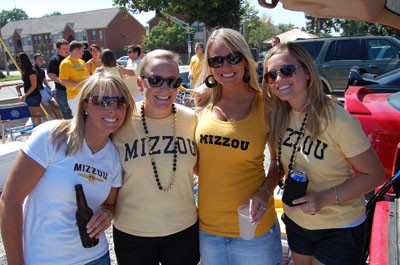 On Saturday, thousands of tailgaters headed downtown to watch the Illinois vs. Missouri football game at the Edward Jones Dome. Read Unreal's take on the Arch Rivalry football game this year. We also have photos of the parking lot tailgaters.

Slide Show If you saw packs of cyclists flying around corners in Lafayette Park, Downtown, the Hill or the Delmar Loop this weekend, it was the Gateway Cup. We have photos from Friday night's pros race around Lafayette Square.

Read the concert review of Ratatat's show. Here's a teaser:

"There’s no telling what kind of crowd you can expect at a Ratatat show. Over the course of three albums and two mixtapes, the instrumental duo of Mike Stroud and Evan “E*vax” Mast has cultivated a nebulous musical identity. One minute the pair’s carefully playing intertwining prog-rock fugues on its Epiphones over samples of tablas and khamaks; the next it’s kicking into some heavy metal riffage over trunk-thumping club beats. Just who exactly would turn out for a show like that?"

Wooh, what a long weekend! Here's what you don't want to miss this week in St. Louis.