Overall Crime Down in St. Louis Despite Recession

Remember, back when our economy was only starting its swirl down the shitter, experts predicted a spike in crime due to a recession?

Well, experts be damned: according to police department data crunched by the Daily RFT, overall crime in St. Louis City was actually lower in the first quarter of 2009 compared to the same period last year.

St. Louis's very own Richard Rosenfeld, professor of criminology at UMSL, published an op-ed in the Los Angeles Times in March 2008, encouraging citizens in the City of Angels to "brace themselves for more crime to come" thanks to a darkening economy.

"My own research has shown that crime rates tend to rise when consumers become pessimistic. Why? Economic theory predicts that people weigh the costs and benefits of law-abiding versus criminal behavior. Like it or not, a failing economy increases the temptations of crime."

Should've told that to the ne'er-do-wells of St. Louis, professor. St. Louis crime stats are after the jump...

With the notable exception of aggravated assault (up by almost 19 percent at over 1,000 cases), almost every category of crime reported by city police showed lower numbers from January through March of this year compared to 2008.

So crime's down in general, true. But the reality on the ground is a bit more complicated: some neighborhoods have fared better than others.

Take robbery, for example. City-wide, total robbery has dipped by about 2.4 percent, as illustrated in the nifty and consummately professional graphic below,

In the Central West End, total robbery has dropped by over half this year to 13 incidents. But, just to the north in Kingsway East, it's almost four times higher at 27 incidents.

Then there's burglary. City-wide, burglary is down 7.3 percent: 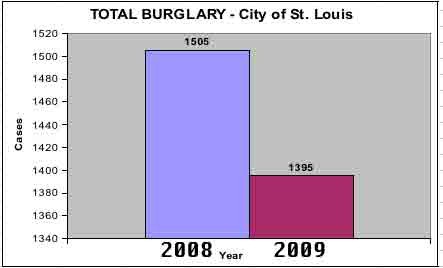 In the historically crime-plagued Gravois Park, there've been 45 percent fewer incidents (27 so far, according to police stats). And the Shaw neighborhood has seen their burglaries drop by about a third to 29 cases.

But burglary is up by over a third in nearby Tower Grove South (to 62 cases), and it's over twice as high in the CWE at 46 cases.

Here are some other city-wide crime stats you may want to see:

The weird thing about all this: other major American cities, such as Los Angeles, San Francisco and New York have reported a similar downward trend.

New York City mayor Michael Bloomberg has poo-poohed the correlation between the economy and the crime rate as "park bench wisdom."