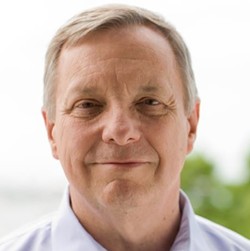 The homicide rate per capita in East St. Louis, Illinois, is about eighteen times the national average -- which U.S. Senator Dick Durbin says is a problem that cries for a solution.

And tighter gun control, he says, is part of the answer.

The Illinois Democrat brought his fight for legislation restricting firearms trafficking to his hometown of East St. Louis this week, where he told reporters, video below, that there is a need for policies that keep guns out of the hands of criminals.

Durbin is pushing the Stop Illegal Trafficking in Firearms Act of 2013, which aims at combating "straw purchasing" of firearms -- when someone with a clean background buys a gun for someone who is prohibited from obtaining one.

Durbin's office and supporters of this measure argue that because there are no federal laws specifically banning this kind of sale, offenders only face minor penalties for making false statements on paperwork.

The bill would establish tougher punishments for anyone who transfers a gun or ammunition to someone else when the person has reasonable cause to believe that the firearm could be used in violent criminal activity.

It is also aimed at combating gun trafficking tied to foreign drug cartels -- by criminalizing the smuggling of firearms out of the U.S. with the intent of engaging in or promoting violent or drug-related crime.

"What can we do that's going to make this a safer city?" Durbin said, citing efforts to close clubs at earlier hours to reduce late night violence coming in from across the river. "Progress is being made. I'm really very heartened and encouraged by it."

He continued, "What can we do to keep guns out of the hands of criminals? Guns that are going to be used on the street to kill innocent people."

In a city like East St. Louis, there is obviously a long way to go, he added.

"The murder and violent crime rate in East St. Louis is eighteen times the national average. Eighteen times," he told the Post-Dispatch. "If we can make some progress step by step, I think we can bring that down."