Missouri Smoking Ban Gets No Opposition During Hearing 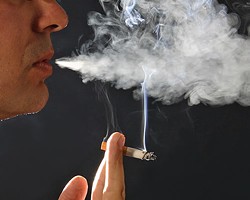 The trouble with smoking? It makes not a sound.
I received an email last night from Bill Hannegan, smoking-ban foe and founder of Keep St. Louis Free, alerting me to a Senate hearing yesterday to consider a bill to ban public smoking in Missouri.

The fact that state senators held a hearing on the bill yesterday was news to me -- and to Hannegan. "I didn't know about the hearing, otherwise I would have gone," he laments.

The Columbia Missourian reports today the only person to criticize the bill was the chair of the Senate Judiciary Committee who compared smoking to eating unhealthy food.


Sen. Matt Bartle, R-Jackson County, who chairs the committee, asked if eating french fries should also be banned because it negatively impacts taxpayers who have to pay for Medicaid costs related to obesity.

"Because that's the slope were on," he said. Bartle said he finds smoking offensive and would support the bill but is concerned that a de facto ban on smoking might lead to banning other habits.

Oh, and speaking of "banning other habits", Bartle is the state senator -- and Ass Clown -- who wants to ban all nudity at Missouri strip clubs.