A lawsuit brought on by Missouri state representatives Cynthia Davis (R-O'Fallon), Tim Jones (R-Eureka) and other "birthers" who believe President Barrack Obama was born overseas, hinges on an obscure Kenyan news report from 2004.

As Fired Up! Missouri recounts today, the article appeared online in Kenya's Sunday Standard back in 2004 and said Obama (then a candidate for U.S. Senate) was born in Africa. 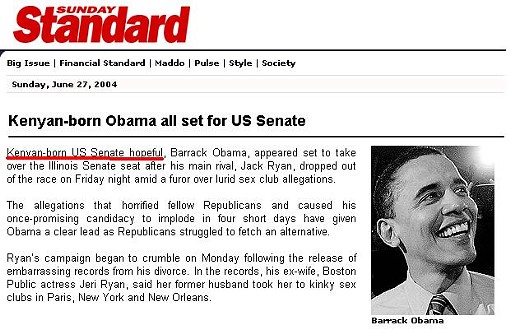 That article is now being used by Davis, Jones et. al, as evidence as to why a federal judge should not dismiss their lawsuit.

Thing is, the article (based on an Associated Press dispatch) is the only such version of the story out there.

As the urban-myth-busting website snopes.com uncovers, the article in the Sunday Standard seems to have been altered by someone at the paper who had little knowledge of Obama -- other than knowing his father was Kenyan. (Indeed, the article even misspelled Obama's first name as "Barrack".)

Meanwhile, other papers ran the very same AP report back in 2004 which does not have the same opening sentence stating that Obama was Kenyan born.

But that's of little concern to Davis, Jones and the birthers. They believe the Sunday Standard had the facts right, and the rest of the media changed the story to benefit Obama and help commit fraud/racketeering on the American people.

In a petition to the court U.S. District Court of Central California yesterday, they ask the judge for more time to research the article.

"If it were possible to authenticate the source for this information, and/or to trace, locate, and depose the authors and informants, and also to track the subsequent changes in the "story" as told over the news wires over the following four years, the plaintiffs submit that they would obtain additional and important, and very solid, grounds for outlining the contours for a complaint for Civil Racketeering concerning the 2008 Presidential elections, involving a massive scheme to defraud using the postal (document delivery) and electronic wire services for the purpose of depriving the American people of their intangible right to honest services."