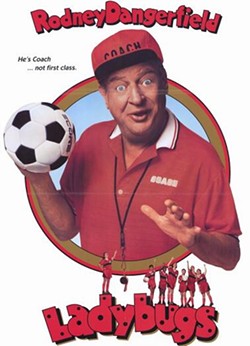 Youth soccer coaches and fake federal agents: They get no respect.
We're sure that teaching kids how to play soccer is a fun and rewarding profession. We're pretty sure, too, that it doesn't pay all that much, which helps explain the bizarre indictment handed down Friday in federal court in St. Louis.

Soccer coach Mark B. Chartrand, 40, is accused of borrowing $138,000 from a former girlfriend and then telling her that he was an undercover agent with Homeland Security when he could not pay back the money. Records show that Chartrand ran soccer programs in St. Louis under the names, MC United Soccer and ABLE MC Soccer.

According to the indictment, Chartrand and the woman (identified only by her initials K.P.) met in 2003 through his activities with youth soccer and soon became romantically involved. Between 2003 and 2008, Chartrand solicited and received numerous loans from the girlfriend totaling more than $100,000.

In 2008, Chartrand wrote 13 checks to repay the woman. They all bounced, according to prosecutors. So, Chartrand did what any sane person would do: He told the girlfriend that he was an undercover agent with Homeland Security and not to worry. He had a major payment coming to him due to his "extraordinary service" with the agency.

Can you guess where this is going?

Chartrand then made up phony letters from the federal government, according to the indictment. Those documents suggested that Chartrand was owed $1.5 million in compensation from Homeland Security. Chartrand then allegedly drafted bogus intelligence reports for the agency and showed them to the ex-girlfriend to prove that he was really an undercover operative.

When he still couldn't repay the loans, Chartrand allegedly doctored bank statements to show that he had money in the bank from the government but that the wire service had somehow screwed up the transaction.

The rest of the story? The woman eventually went to the cops and Webster Groves police and federal agents began an investigation that ended in Friday's indictment. If convicted on charges of impersonating a federal officer, Chartrand could face three years in prison and/or fines of $250,000.