Update: It appears Carnahan took his Facebook profile down a couple hours after this post went up. Carnahannies, here's a hint: top right corner of the post, click on the little pencil icon, and hit "remove tag". Don't throw your precious Facebook baby out with the bath water!

Sucks when your wall gets bombed by haters. It really sucks when you're running for office, and the guy doing the bombing is your opponent, a relentless Lacy Clay in an increasingly bitter primary battle.

Last week, Congressman Clay, who currently represents District 1, kicked off "30 Days of Differences" a gloriously shit-slinging social media campaign that highlights the differences between himself and his opponent Rep. Russ Carnahan, another popular Democrat who was tossed into the same district after brutal redistricting this year.

Screenshots galore after the jump...

Clay has been posting statuses to Facebook every day, attacking Carnahan's record and even challenging his basic counting skills.

The kicker here is that Carnahan does not untag. His own wall is littered with these attack posts (though you have to be friends with him to see posts he's tagged in). Both politicians have been enthusiastic users of Facebook and Twitter, but come on Russ? Get some of the kids in your campaign office to untag that stuff. Clay's next big difference? "Our social media interns are better than your's." 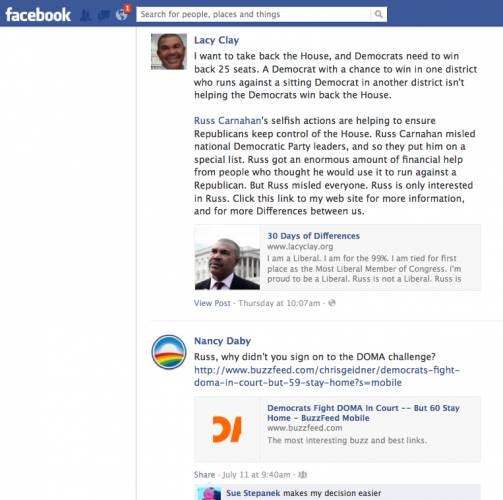 Cosmo's "10 Signs You Should Unfriend Someone on Facebook" might now have an answer for the running scared politician, but we at DailyRFT think it's about time you got this frenemy off your wall, Russ.