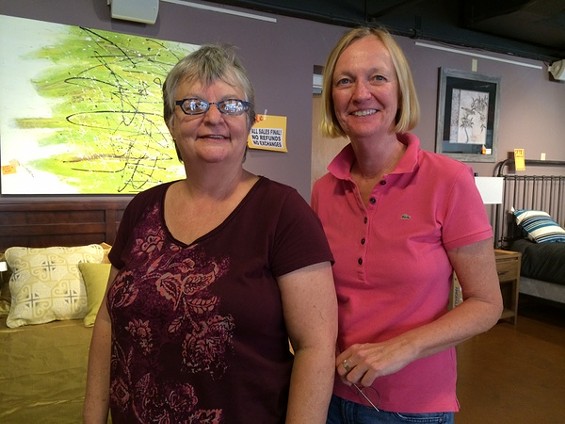 Good Works furniture store is closing after 23 years in the Delmar Loop, and the owners say the Loop Trolley is to blame.

Chris Dougher and Rita Navarro tell Daily RFT that the Loop has changed from a neighborhood street to an entertainment district for tourists, young people and students, which brings plenty of foot traffic to bars, ice-cream stores and novelty shops -- but not to furniture stores.

And as the Loop prepares for the new trolley, a $43 million project that will connect the Loop with Forest Park, things will only get worse, Navarro says. Between construction and increased tourist traffic, there's no future for a store that caters to a local client base.

"We are not going to endure the trolley traffic construction only...to end up with a mess," Navarro says. "We probably would have stayed in business longer if it hadn't been for the trolley."

Dougher and Navarro say they're ditching the Loop before things get too bad and are going into retirement earlier than planned. Already, they saw a significant dip in back-to-school sales in August when Washington University's new student housing on the Loop opened with furnished apartments -- another sign that the Loop is catering to a transient student population instead of its University City neighbors, the owners say.

Dougher and Navarro have spoken out against the trolley since Loop impresario Joe Edwards first got serious with the idea more than six years ago.

"It is very conducive to restaurants, hotels and nightclubs to have a trolley," says Navarro in a thinly veiled shot at Edwards, who owns the Loop's Blueberry Hill, Moonrise Hotel, the Pageant concert venue and the Pin-Up Bowl. "It's just entertainment, but I guess tourists will ride it, maybe. Local people aren't going to use the trolley."

The trolley project has been delayed again and again by lawsuits and other roadblocks, but construction crews got started relocating utilities along the trolley route this summer.

"With a huge public-works project on Delmar about to begin, we just don't want to suffer through the negative impact it will inevitably have on our store," says Dougher, who calls her store the "first casualty" of the Loop trolley. "And in the end, adding trolley traffic to Delmar will only make access to retail stores more difficult."

Before the store closes for good, probably in about a month, Good Works is hosting a retirement/going-out-of-business sale until owners sell out of what's in their warehouse.