Think of it like the beer summit only fishier. Officials from the White House Council on Environmental Quality announced yesterday that they will host governors from across the upper Midwest in early February to discuss how to stop Asian Carp from invading the Great Lakes.

The announcement comes on the heels of a Supreme Court ruling that blocked the states surrounding Illinois from closing the shipping canal that connects the Chicago River to Lake Michigan in order to block the Carp's relentless progress into the largest body of fresh water in the world.

Missouri will not be included in the Fish and Chips Summit (yes, we just made that up) because Asian Carp are already all up in our business. The mostly inedible invasive species now constitute 95 percent of the fish species in some local waterways.

Their domination has disrupted eco-systems, endangered native fish species, and provided a whole new source of entertainment for the State's rednecks, who love (sometimes a little too much, it appears) to shoot the massive critters with bows and arrows. 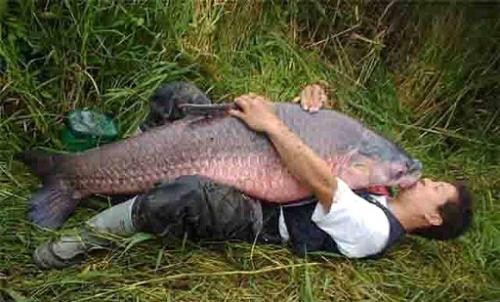 Image Via
But enough about us. Why should the White House give a carp about the Midwest's fish problem?

The Associated Press reports (via KMOX):

Concern about the progression of the Asian carp toward the Great Lakes increased this week after DNA samples taken beyond the final barriers between Chicago-area waterways and Lake Michigan tested positive for the aggressive fish.

A Michigan congressman introduced legislation Wednesday to immediately halt the potential entry of the carp into the Great Lakes. U.S. Rep. Dave Camp, the top Republican on the House Ways and Means Committee, titled his bill the CARP ACT, which he said stands for Close All Routes and Prevent Asian Carp Today.

''The failure of the Supreme Court to act yesterday jeopardizes the future of the Lakes and it is clear we must take additional steps now,'' Camp said in a statement.

Under his bill, the Army Corps of Engineers would be directed to close the O'Brien Lock and Dam and the Chicago Controlling Works until a controlled lock operations strategy is developed. Additional barriers would be erected in nearby waterways to keep the carp from getting into Lake Michigan.

Camp estimates that if Carp take over the Great Lakes it could mean "the potential loss of a $7.5 billion industry and ecological devastation of the entire Great Lakes region.''