14-Year-Old Charged as Adult After Night of Robberies, Shooting Puts Victim in Hospital 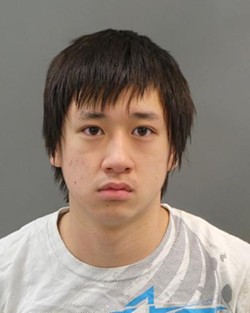 Things keep getting worse for the band of four south-city teenagers who spent a recent Sunday night racking up a lifetime's worth of criminal charges.

When police first arrested Jayven Moose, eighteen; Kevin Dang, seventeen; and Justin Campbell, seventeen; on suspicion of shooting a random woman in the neck, fourteen-year-old Desmond Nguyen, of the 4600 block of Pennsylvania Avenue, was scurried off to the juvenile authorities.

But on Wednesday, the Circuit Attorney's Office issued warrants for Nguyen as an adult for first-degree robbery, first-degree assault and two counts of armed criminal action. Nguyen is held on a $200,000 cash-only bond.

Police say the four teens shot a woman in the 5300 block of S. Broadway at 11 p.m. on Sunday, February 9, striking her in the neck and sending her to the hospital.

The woman was able to describe the teens' gray van, and police quickly found the teens in a car matching the victim's description with two guns inside.

Police were able to pin three additional crimes on the teens based on their investigation: a shooting into an empty house in the 7000 block of Trainor Court, a robbery in the 3600 block of Neosho Street and property damage at Keokuk Street and Spring Avenue.

Nguyen's charges aren't as severe as his counterparts'. Here's what the three older teens are facing:

Jayven Moose, eighteen, of the 6100 block of Virginia Avenue, faces eight counts of armed criminal action and eight counts of shooting a firearm from a car at a person, car or building.