Ass Clown of the Week: Politicians and Those Unable to Deal with Teenage Relationships 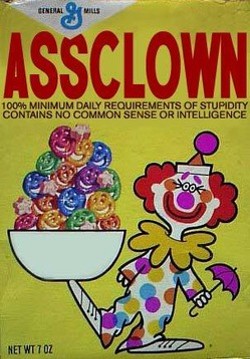 It's that time of the week. Time to vote for the local newsmaker of the week whose words or actions brought them the most shame/humiliation. In other words, who's the Ass Clown of the Week? And the nominees...

1. John Shimkus: The Republican from Collinsville, Illinois, said this week that he was taken out of context last year when he read from the Bible during a session of Congress. He believes in climate change but was just quoting scripture about how God would never allow global warming to harm human life. Besides, as Shimkus also pointed out this week, global warming could actually be good for tourism -- in Greenland. (Shimkus wants to head the House Energy and Commerce Committee overseeing environmental regulations.)

3. Jim Lembke: The Republican state senator from south St. Louis County was quoted this week saying that "St. Louis has not earned the responsibility for local control" of its police department. Lembke's statement prompted a quick rebuttal from St. Louis Mayor Francis Slay: "In all do respect to Senator Lembke, he doesn't live in the city of St. Louis, he's not paying the bills."

4. Henrietta Arnold: The St. Louis police lieutenant is being investigated and sued on allegations that she arrested a girl solely because she didn't want the teen dating her son.

5. Blaine Luetkemeyer: The Republican congressman representing northwestern Missouri voted in favor of cutting federal funds for National Public Radio this week. Luetkemeyer made his stance after readers at the GOP website YouCut voted in an online poll to cut funding for NPR.

Cast your vote below...