Courtesy of Bill Greenblatt with UPI... 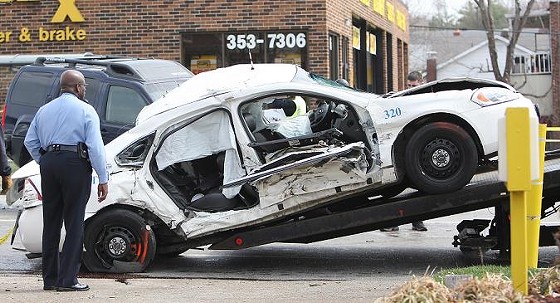 UPI/Bill Greenblatt
A St. Louis Police officer watches as the patrol car that was driven by 27-year-old rookie oficer David Haynes is loaded onto a flatbed in St. Louis yesterday. Haynes was killed after his patrol car was struck while following a suspect with lights and sirens. The car was struck on the passenger side by a SUV, then spun around and hit again in the driver side door by another SUV.


In related news, St. Louis police say they've arrested the burglary suspect Haynes was chasing when he died. The suspects identity has not yet been made public.
© 2023 Riverfront Times