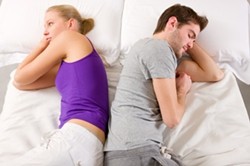 via Ambro
Broke and trapped? SugarDaddie.com wants to bust you out!

The dating website SugarDaddie.com -- the site that connects wealthy suitors with cash-strapped "sugar babies" -- is celebrating its tenth anniversary in a very unique way. They'd like to encourage you to break up.

"A lot of the divorced men and women out there would rather be living the sugar-daddy-sugar-baby lifestyle," says Darren Shuster, spokesman for the site. "Not everyone is cut out for the white picket fence."

So for three unhappily married couples in St. Louis, the site would like to offer an escape hatch: a free divorce.

Shuster admits that this stunt has everything to do with publicity for SugarDaddie.com -- not to be confused with SeekingArrangements.com, another sugar-people website we've written about in the past. They're giving away divorces in several other 'burgs, including Kansas City.

"The cost of divorce is just incredibly expensive if you look at the hourly rates. Maybe we'll be the first dating website ever to give out divorces," he says. "I would say we're not doing God's work, but maybe we are."

Here's the nitty-gritty: Submit your tale of marital woe here and if the story catches the eye of the site's founders, you've won your freedom. That comes in the form of a free $300 divorce package from LegalZoom which covers:

"Keep the stories interesting, and you may be selected," says Shuster.

It strikes Daily RFT that in order for the LegalZoom package to serve the couple's needs, they'll have to be preparing for a very amicable divorce. The knock-down, drag-out kind don't get worked out by filling in a couple of fields on a form.

But hey, maybe friendly divorces are hilarious. If you want out, visit the site here.