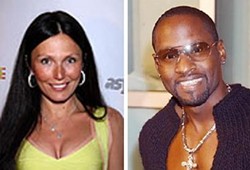 Ira DeWitt owns Nofti Records, a small label based in the St. Louis suburb of Brentwood. Gill, who reached fame in the late 1980s when he replaced Bobby Brown in the R&B group New Edition, had recently signed on with the label as one of its star talents.

As TMZ reports, yesterday the 39-year-old DeWitt sued Gill in Los Angeles County Superior Court on charges that the singer slandered her in an outburst last week on Twitter in which he called her "deranged" and "fucking nuts."

Gill was reportedly angry that one of his upcoming songs was linked onto the Internet prior to its official release. And, according to Gill, DeWitt was to blame because she has a "hard on" for one of the song's producers.

DeWitt is seeking unspecified damages in her defamation suit and asking the court to stop Gill from dissing her on Twitter.

My, my, my. Guess there's no kissing and making up for these two.
© 2023 Riverfront Times