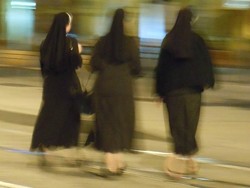 An 83-year-old nun was walking to church when a man armed with a screwdriver robbed her of her bag and wallet before getting away in an SUV driven by another man.

The incident happened at St. John the Baptist Church early Thursday morning. As the nun was walking into the rectory, a man pushed her inside and took her belongings. Reverend John Keenoy, pastor at SJBC, tells Daily RFT that the nun was not injured.

Police are looking for a suspect described as a black man in his forties who is 5'10", bald and has a stocky build.

The SUV was light colored, according to the Post-Dispatch.

As for the nun who had to go through the ordea, she's back to normal business except for "getting her drivers license and things like that," Keenoy says.