Drunk Lady Passes Out in Hardee's Drive-Thru, Gets Arrested 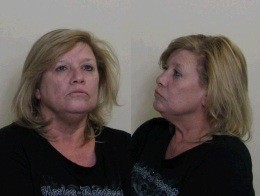 Janice Lyles of Godfrey was arrested after passing out drunk in the Hardee's drive-thru
Upon hearing this tale from Captain Mike Dixon of the Madison County Sheriff's Office, Daily RFT was astonished it had never happened to any of our own staffers.

Therefore we won't mock Janice Lyles of Godfrey, Illinois, too badly for what she did on November 24. But we will still mock her slightly.

At 9:57 that evening the Madison County Sheriff's Office fielded a complaint of a female driver slumped over the steering wheel in the parking lot of Hardee's in Godfrey at 2720 Godfrey Road.

When the cops arrived, Dixon says, they found Lyles passed out in her car, in the drive-through lane by the window.

The officers roused her from her slumber. She appeared to be drunk. They made her take "a series of field sobriety tests," Dixon says, which she failed. (In her defense, she was probably still hungry.)

They then placed her under arrest for driving under the influence and operating an uninsured motor vehicle. Those are misdemeanor offenses.

After they booked her, she was able to secure the $300 bond and has since been released from custody.