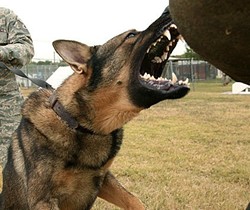 A St. Louis county police dog ended up biting a suspect and a city cop during a struggle this week -- landing the suspect in jail and the police officer in the hospital.

Authorities say that on Wednesday night in the area of north 20th Street and East John Avenue, a city cop saw a vehicle that was listed as stolen (from Indiana) and wanted in the city. The vehicle traveled north into the county and then west, finally exiting Interstate 270 on Gravois Road. At this point, county police responded to the scene, prompting the suspect, a 24-year-old male, to flee east to May Valley Drive in Fenton.

He then got out of the car and ran on foot, cops say.

At this point, around 11:15 p.m., county and city cops collaborated and successfully apprehended the suspect.

First, however, the man allegedly resisted arrest, prompting a county canine to bite him. The dog somehow ended up biting the city cop during the struggle as well. It may have been due to the fact that he was in plainclothes.

via Google Maps
The Fenton street where the chase finally ended.

This injured cop was taken to a local hospital where he was treated for the bite wounds. The suspect, who police officials have not yet named, was booked by the county.

Here's the full incident report from the metro police department.