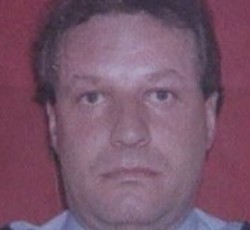 Eddie Maher back in the early 1990s.
A British national on the lam for nearly two decades was arrested this week in Missouri in the small town of Ozark, south of Springfield.

Edward Maher was working as an armored truck driver in his native country in January 1993 when he drove off with over 1 million pounds in bank deposits and was never seen again, earning him the name "Fast Eddie" in the British tabloids.

Fast forward, then, to a tip Monday to Ozark police that the 56-year-old "John Maher" working as a cable installer for the St. Louis-based company SuddenLink was a wanted man in England.

Police checked his driver's license photo to pictures of the suspect in the British bank heist and determined that the person was probably the same. So, too, did the FBI.

Later on Monday, Maher was bailing his adult son out of jail in the nearby town of Nixa when police let slip they they knew his true identity but couldn't arrest him until warrants were issued. Maher then moved his family into a local hotel and was reportedly attempting to flee the area when he had a change of heart Wednesday and had his son call police and tell them his whereabouts.

Maher and his family -- a son and a wife who came with him from England and another teenage son who was born elsewhere -- had lived in Ozark for 4.5 years.

It's not clear what became of all the loot. Maher has asked for a court-appointed attorney as he can't afford one on his own.