A little before 3 p.m. yesterday, a backhoe digging near the corner of Clara Avenue and Delmar Boulevard hit a gas main and cracked it. Something introduced a spark. Soon, the air was on fire.

As Laclede Gas workers tried to shut off the valve, fire crews began hosing down the roof of the apartment building across the street to prevent it from igniting as well.

But once it became clear that it would take some time to staunch the flow of immolating gas, there was nothing for firefighters, cops, residents, and rubberneckers to do but stand around and gawk as the snarling, hissing fireball leapt toward the sky.

Despite the fact that a 30 to 40 foot column of fire was shooting straight up into the air, the scene was pretty relaxed by about 5 p.m. Firefighters texted. Old ladies, moms with strollers, and teenagers with cell phone cameras milled around the area blocked off with yellow "FIRE LINE DO NOT CROSS" tape. Waves of white hot air brushed against people's faces as a flood of water ran off the apartment building and down Delmar. Even the ice cream truck rolled down Arlington Avenue at one point.

Check out some photos and video as the fire raged and crews puzzled out what to do next: 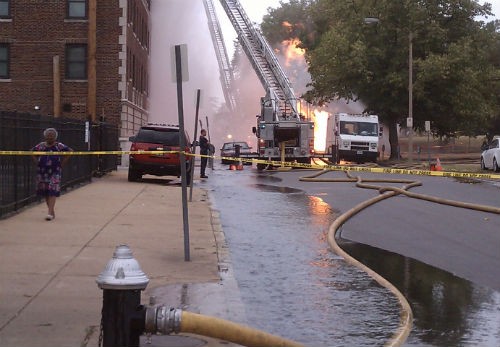 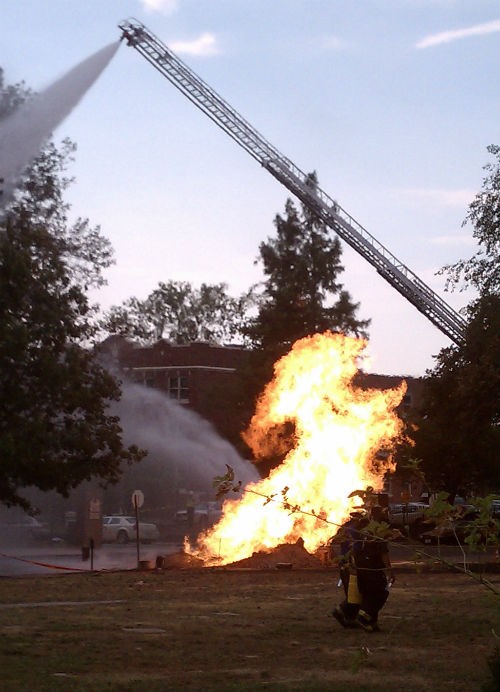 From left to right: Andrea Peoples, DeBorah Ahmed, an unidentified firefighter, and Malena Amusa were more concerned with plugging Peoples's cancelled dance class (Kreative Pandemonium!) than concerned for their safety.

The main was finally cut off at about 7 p.m. No one was injured and no property was damaged.